Menu
Facebook Twitter Instagram
Day Five (Sept 22)
It is 4:45am and I hear noise.  It’s too early for housekeeping.  It’s the Germans on the fourth floor.  The elevator only goes to the third so they’re coming down the stairs.  Click Clack, Click Clack, high heels on tile floor. Bang – their luggage hits the floor.  I can’t go back to sleep once I’m up.  If I were at home, I’d clean for a few hours then fall asleep.  Too late, I’m up.  A little light reading, then I head down to the lobby to use the internet.  The smoke smell is most prevalent at the internet lobby.  Good news, my luggage arrived at 3am.  I was beginning to wonder if I would ever see it again.
Breakfast at 7:30am with Lizzie.  She is feeling better.  Turns out, she is trying to get artists from all East European countries (except ).  So she’s heading to .  Her daughter’s partner is an American food critic and sports writer for the local paper.  I get a couple of recommendations from her.  There’s another older American couple.  We talk shopping deals.  I hurry through breakfast because today is spa day.  I had hoped to get at least 8 hrs of sleep but the Germans halted that.  I head back to the room for a cat nap and almost missed my pickup for the spa trip.  No problem, I’ll sleep the hour and half drive on the bus.
There are two Brits, two Canadians, an elderly Egyptian gentleman, and six Spaniards.   I recall my conversation with Ms Chic and GI.   Ms Chic said that Spaniards are very prejudiced and speak little to no English.  She says they chose French over English.  Don’t they know the glory days of Ferdinand and Isabel have since died?  Ms Chic is Puerto Rican and the Spaniards look down on her since she isn’t Castilian.  Her husband (caucasian guy from suburbia Chicago) said he hadn’t noticed.  Ms Chic replied maybe it’s because you’re a diplomat and they have to treat you differently.  The Spaniards are aloft or is that my bias now.   The tour is in Spanish and English.  I understand more in Spanish than I expected.   I eavesdrop on the Spaniards.  I determine they are aloft.  The Brit has an accent similar to Liza Doolittle’s dad in “My Fair Lady.”   He’s a tradesman and comments on construction we see – they are using old school techniques instead of commercial crap.  He appreciates that craftsmanship.  It reminds me of something my dad would say. 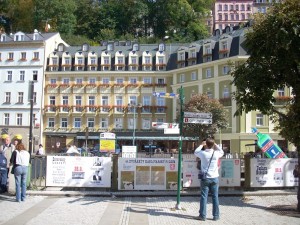 We are ten minutes to Karlovy when the guide explains that most of Karlovy real estate is owned by Russians.  The Russians outnumber the Czechs.  The Bohemian king invited Peter the Great who loved the mineral springs so much he built a Russian Orthodox Church and Russians set up shops.  Sounds too much like Pilgrims taking advantage of the Indians to me.   When communism arrived, the Russians became the majority.  To this day you cannot work in Karlovy if you do not speak Russian.  It is a vacation spot for Russians.  The guide said Czech’s refer to it as the ‘s suburb.   I decide that I don’t like the Russians.  When we arrive, nothing but Russians.  More signs in Russian than   Russians are running around like they own the place.   I will not support the man.  I will not buy any place that is Russian owned.  I begin to sing in my head “fight the power, fight the power, fight the power that be.”  Russians are da’ man and we must fight da’ man.   I am resolved.  Militant Ronda has come out.  Darn Russians.  Fight the power. 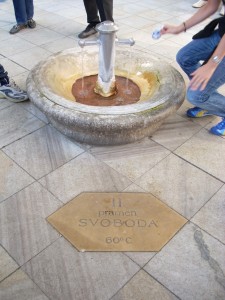 We stop at our first spring.  The guide warns that each spring has its own herbs and suggests drinking from no more than two because mixing the herbs can be dangerous.   You don’t have to tell me.  I hadn’t planned on drinking anybody’s “mineral” water.   My luck I’ll get a case of the runs.  The people on the tour take a big gulp at the first spring and pucker their faces.  It’s salty – idiots.  Ronda does not play guinea pig.  The second spring has steam – odd.  Before the guide can warn them, they are burned.  The water comes deep underground and the gases make it at least 60 degrees.  This spring and the nearby river are named after the Czech word for hot.  It helps to pay attention. I wondered why the Russian woman was filling a coffee pot with the water.  Russians everywhere – fight the power. Wait a minute the crystal and garnet is cheaper here than .  Fight the power becomes faint and the capitalist says the revolution must take a break for a deal of a life time.  Stay strong – fight the power.  Wait a minute there are fur shops advertising 50% discount.  My resolve is weakening.   Capitalism wins out.  It won’t hurt to buy one set of crystal stemware from the Russians.  As soon as we break I will only purchase one item. 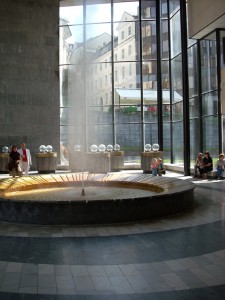 We are at lunch together.  The Spaniards sit at one table and the rest of us at another.  Aloft Spaniards.  The Canadians and I commiserate over the value of the dollar.  The Brit in his heavy Welsh accent replies that it is tough now.  I said not for you.  He replied, “Ah the pound is doing alright.”   I interrupt, “Alright?  Great more like.  The pound is two to one on the dollar.”  Our guide is well traveled and educated – nice blue eyes to boot.  He speaks Czech, German, English, Spanish and French.  He notices my pint is still full and suggests that I try Kozel – a sweet beer with a little honey.  Enough talking it is time to shop.
I desert the revolution and head to the Russian shop.  “Miss let me help you.  You like vite [white] gold or yellow.”  I get yellow.  Almost 700 crowns cheaper than .  Darn those Russians.  That’s it, I won’t support Russian enterprise propaganda with any more purchases.  But wait, a store is selling garnet stud earrings for 500 crowns or less.   Ronda, no impulse buying, fight the power.  I almost bought them but it was time to meet the rest of the tour.  Spa day was good.  I became a pseudo Marxist revolution against the machine (Russians) and converted to capitalism all within an hour.  Yep, I’m American.  The Europeans here have asked if I was from or  – probably because I’ve been speaking every language but Czech.  I reveled in that until today.  The red white and blue showed through in the end. 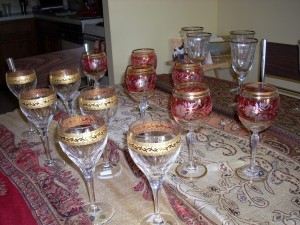 I wanted to go dancing.  However, I have been up from 5am-till 1am everyday I’ve been here.  Plus, with dancing moves like mine I don’t want to cause a riot.  “I’m too sexy for , so sexy it hurts.”  I was once told that watching me dance would turn a gay man straight.  Too bad it can’t make a straight man good.   I decide that I’m too bootylusicious to hit the club.  Plus, I don’t like trance music.  You have to be on something to dance to that more than 10 minutes.  After a long dinner, I head back to the hotel to write my journal.  I need to leave for pastry and caffe.