The apartment hunt/move was traumatic and melodramatic.  I became sick. I think I am allergic to this apartment.  No, seriously.  I am not a sickly person.  I’m usually in good health with the exception of a cold in the winter and the spring.  I was sick the first week I moved into the new apartment.  Since the move, once a week I have had head congestion and pain.  I never had a sinus problem.  I am afraid there was water damage to the bathroom with the previous tenant.  They renovated the bathroom, but not well.  I can see stains from water damage on the ceiling and the bathroom door.  Plus, there is a mold spot in the shower by the soap container that won’t go away no matter how much bleach or Lysol Mold/Mildew remover I use.  Instead of feeling at home, my first thought was I need to move out of this place as soon as possible. 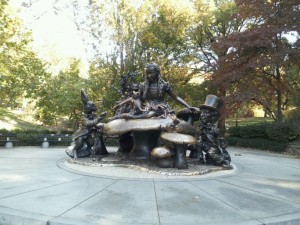 I am not in love with my apartment, but I no longer despise it.  Fortunately, life has ways of bringing you back to center and reminding you of what’s important.  In Chicago, I used to mentor youth in college and career preparation.  One of the former teens is now a college student and interning this summer in NYC.  I decided to show her my favorites places and made a point of telling her what to avoid.  I took her to Amy’s Bread where she fell in love with the almond brioche bread and I forgot to share my ginger snaps (not on purpose).  I showed her my favorite spot to read where you can almost forget you’re in the city.  Where to get groceries is key, so obviously I told her the farmer’s market in Union Square on Wednesdays.  In case she could not make it there, I showed her my meat market, farmer’s market, fish market, and spice store.   She could not remember my reading spot, so today I showed her my getaway in the city.  On the way there, we walked past Amy’s Bread.  She looked at me with a twinkle in her eye, “do you think we can stop in because I dreamed about the almond brioche bread?”  She didn’t have to ask me.  We walked in happy because there was no line.  No line was a bad sign.  Darn New Yorkers raided the place to stock up for their weekend escapes from the city.  There was no almond brioche.  They sold out early on Friday and again this morning. Thank goodness they always keep my ginger snaps in stock.  We bought some snacks to enjoy the reading spot.  Watching her light up over my favorites spots or hearing her talk about her discoveries made me realize how much I like my new city – even if my apartment is trying to slowly kill me. 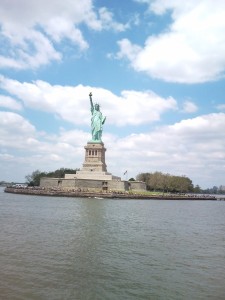 After a day of showing her other haunts, we hopped the subway home.  As we were musing over a few new finds a young dude makes hand signs at me.  (Background, I am not an approachable woman for men.  I wear a “no” face for a reason – I don’t want to hear it.  Save it for a young fool who believes the crap you’re shoveling. I don’t have time to turn boys to men or teach you what your mama or daddy should have.)  I look at the guy like he’s crazy and continue my conversation.  He mumbles something.  At this point, I think he’s deaf and dumb and I say, “I don’t understand sign language.” He finally speaks at an audible level and said, “I was trying to tell you I like your glasses and shape.”  I give him the “you must be joking look” and continue with my conversation.  By this time, other subway riders are watching this scene.  Instead of taking the hint that I am not interested, he acts like Pepe Le Pew and continues with his “mack game.”  His cell rings and he’s still trying to talk to me.  All the while, my former mentee is giggly visibly and other riders are rolling their eyes like “he just doesn’t get it.”  He asks if I have a man and can he get my number.  “I got a man (always say this) and no you can’t.”  He proceeds to ask if I would take his number.  “No I won’t call you.”  My mentee is cracking up, other riders are in disbelief.  I am trying to get off and he gets off at my stop still yapping!  After saying no and pretending like he wasn’t there, he finally left me alone.  A year in NYC and I never had a problem on the train.  This fool almost messed up a good day of shopping and exploring the city.  Thank goodness I had ginger snaps to erase this horrible memory from the day.  My mentee sent me a text,”once you got off the train the woman across from us said ‘you can’t just approach a woman any old way.'”  Then she asks, “did you bring home any strays ;)”  My reply, “never mess with strays.”  As my granny used to say, “don’t mess with something the dogs threw out and the cats dragged in.”  That fool needs to be happy I didn’t have mace or a taser on me.  Otherwise a beautiful day in the city.