2018 Update: Why didn’t Christine Blasey Ford report Supreme Court nominee Brett Kavanaugh when it happened? That is the tired refrain trotted out whenever a woman comes forward. Victims of rape and sexual assault are often blamed for the crime committed against them and male victims come forward even less. A 12 year old is raped and her rapist is given probation. The whole world watched as Anita Hill was made out to be some villain when the Senate was aware of her allegations long before they were made public. The Senate chose to ignore them until public revelation required they acknowledge them. Here we are again. The Republican party has candidates on the ballot that includes a brothel pimp (Dennis Hof), a pedophile, and a Nazi (Arthur Jones). Let us not forget Mark Foley and Dennis Hastert . A few years ago Adria Richards complained about inappropriate behavior at a tech conference. She was fired from her job and received threats against her life. There are those trying to dismiss Kavanaugh’s behavior as a youthful indiscretion, but Trump took out a full page ad in the newspaper recommending that five teenagers (Central Park Five) be given the death penalty for similar allegations. Even after DNA evidence proved it was not the Central Park Five, Trump still vilified them. However, Republicans attempt to frame Kavanaugh’s action as a youthful discretion. The Republican party want this Supreme Court appointment as much as Trump. Therefore, we will have another Clarence Thomas on the Supreme Court telling women what to do with their bodies.

It is Friday afternoon and I cannot stay awake, so I make a caffeine run.  In the elevator, four guys are talking about the dongle joke and the developer evangelist. Being tech illiterate, I assume it is in reference to another religious leader caught in a sex scandal. If only that were the case. I return to my desk and google it. OMG! It is worse than a religious leader caught in a sex scandal. The woman is receiving rape and death threats for reporting inappropriate sexual talk at a conference for tech industry professionals! 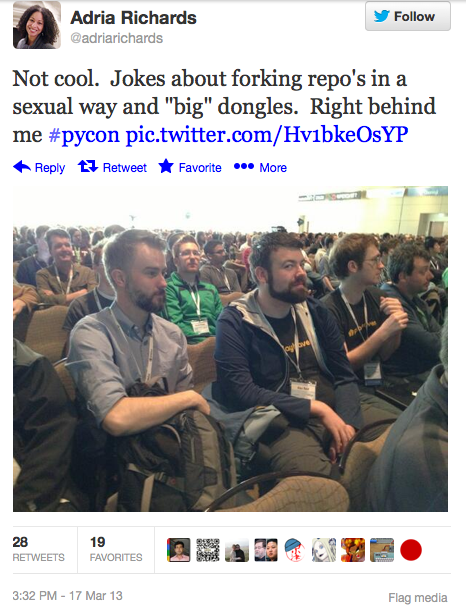 First, I am not in full agreement with the way Ms. Adria Richards chose to handle the situation. I would not have tweeted. I am more of a direct approach type. However, Ms. Richards handling of the matter does not negate the fact that “Mr. Hank” was wrong and inappropriate. In his tweet, he says that only that dongle joke was sexually laced and not the “forking” comment, as if that makes it right! Sexual harassment policies and training are standard for most companies. Additionally, the conference had a code of conduct that stated sexual language and imagery was not appropriate. What part of that didn’t Mr. Hank understand?! I am astonished when people say or do idiotic things and then become appalled that they must suffer consequences for their stupidity.
Second, how dare Mr. Hank use his three kids to shame Ms. Richards for his termination! Had he thought about his three kids before making his sexual comment, maybe he would not have made it. Only Mr. Hank is to blame for his disregard of conference rules and acceptable behavior in the workplace. The locker room banter did not belong at a professional conference. Now had Ms. Richards turned around and told him to shut up because his small dongle could not frog a fly, then she would have been considered inappropriate. A double standard indeed.
Third, women have put up with crude, crass, sexual innuendos at the workplace for too long. We should not have to simply deal with it. This is not the locker room or a strip club. It’s the workplace. As an attorney, I have dealt with the issue on more than one occasion. In regards to courts punishing employers for creating a hostile work environment, one male attorney said, “I miss the days when you could slap a secretary on the a** and not get in trouble for it. I remember when a partner used to make them sit on his lap in order to get their holiday bonuses and chased one around the conference room table when she didn’t.” He had a hearty laugh over the “good ole days.” Once I walked into the partner’s office to discuss a case, several of the male partners and associates were already in there talking about strip club visits and who got shot down by women at a bar. My response, “I find that men who constantly talk about sex do so because they are lacking…It’s like the guy with the sports car over-compensating for other shortcomings.” One replied that they would have to stop talking like that around me because I sensitive. I am not sensitive and am known to have lively banter outside of the workplace. It was simply inappropriate talk for the workplace. I told the guys if they paid their wives like they paid the strippers, their wives would also pretend they were the best they ever had. Somehow, they became silent. Porn in the law firm is commonplace that you don’t bat an eye, unless it’s kiddie porn. Then they worry about lawsuits. Just guys being guys, right?
The fact that Ms. Richards is receiving rape and death threats only reinforces our culture’s lack of respect for women at home and in the workplace. Why is Ms. Richards being harassed and  blamed for Mr. Hank acting like a pubescent tween seeing boobies for the first time? He is a grown man and should know better. That he doesn’t is more disturbing. Was the comment so important he couldn’t have waited until the conference was over or how about text it to his friend? Despite conference rules against such conduct and sexual harassment policies, it was decided that “boys will be boys” over-rode minor details like a code of conduct and policies. Well, Mr. Hank is not a boy but a grown man and was well aware of what he did. He chose to make his comment public, so he should accept his consequences without excuses.
Mr. Hank was quick to point out he has three kids. I wonder if any are girls. What would he tell his daughters? Daddy lost his job because he made a joke about his dongle. I can imagine the kids asking, daddy what’s a dongle? If he has daughters, when they grow up and guys do the same to them, how will he advise them? Would he look on it so lightly as boys being boys? 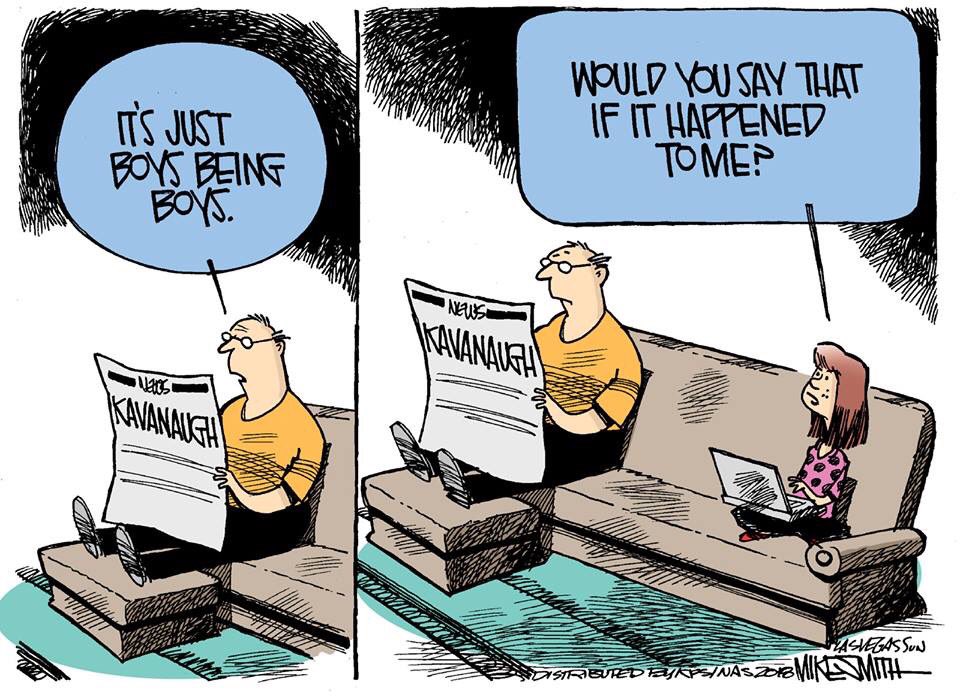 For all our progress as women and the much herald success of Sheryl Sandberg’s “Lean In,” this incident with Ms. Richards is yet another reminder that the more things change the more they stay the same. So men, when your wife, sister, daughter, or mother complain about male coworkers sexually inappropriate conversations, tell them to stop complaining or like Ms. Richards, they too will be subject to rape or death threats. They are probably being too sensitive or hormonal anyway, which is why they can’t appreciate a good joke.
Ronda Lee