“Nothing so bad that it might not be worse.” – Aesop Fables

I am a fan of Aesop Fables. They were a favorite of mine as a kid.

I’ve been rattling on about sowing seeds and harvest. It’s summer and I’m looking for blossoms. However, it seems my seeds are stunted or blossoming delayed. Just when I thought I was on the cusp of something great, a stale mate. I figured I’d endured enough storms of life to finally see a beautiful harvest. In the words of Kindred Family Soul, “don’t want suffer no more, I’ve had enough of being broke and poor to last me a lifetime.” Now another road block. Argh!

In addition to the stale mate in my goals, normal stuff happened this past week that had me shaking my head. Now I’m a cynic so I subscribe to Murphy’s Law of anything that can go wrong will go wrong. However, every now and then life throws you a bone. Just when I thought things were getting traction – brakes engaged. So in the middle of stressing over getting an agent, published, and trying to draft a financial/marketing plan, I came home Monday evening to no electricity or gas. ConEd mistakenly disconnected my power. After working 12 hours and arriving home at 10pm, I didn’t have the time or patience for this. Lack of customer service seems to be the norm for most companies and my call to ConEd that night was no exception to the rule.

Candlelight is not romantic as your only source of power – only in Jane Austen novels. 48 hours later my power was restored and I felt like I survived ThunderDome or WaterWorld. Lights, hot water, internet!! Is Tina Turner’s “We Don’t Need Another Hero” playing in your head? Good, now you feel my pain from last week. All I wanted was life beyond ThunderDome. My week started off bad – majorly inconvenienced and throwing away spoiled food. Not surprisingly, I had an attitude and unchecked someone else would have experienced the wrath ConEd deserved.

Life has a way of bringing us to reality or should I say humanity. The morning my power came on, I took the subway to work. I was grumpy, sleep deprived, and generally peeved off. As I exited the train, I noticed a crowd but no street performer – odd for NYC. Uncharacteristic, I walked towards the scene. As I approached, I saw a mother kneeling over her teenage son who passed out on the platform. Her young son laid on the platform while someone tried to see if the boy was breathing. All the while, the mother is calling her son’s name asking him to respond. Women standing near started to well up with tears. A train conductor radioed for assistance. At that scene, I let go of my anger of the week’s events. As much as I had been inconvenienced, it did not compare to what I was witnessing. My heart ached for that mother. The encounter was an immediate gut check – “nothing so bad that it might not be worse.”

I’m not saying you shouldn’t get upset or complain. However, sometimes we have a tendency to wallow in “woe is me” self-pity that we forget perspective. My week was frustrating, but nothing that came close to the possible loss of a loved one. I know that pain and have been intimately acquainted with that grief. It was a loss that I thought would break me. Remembering that loss and seeing the mother made me throw away my temper tantrum of self-pity. I’m not minimizing bad experiences or nuisances, just saying at times a big picture perspective is necessary to see beyond the trees.

I may not see immediate blossoms, but I’ll continue to till the soil and nurture it to promote growth of the seeds planted. I’m a fan of an Indian summer, so maybe my harvest will bloom later just more fragrant and colorful.

Uh-oh, is that a bit of optimism from the cynic?! Anything is possible. 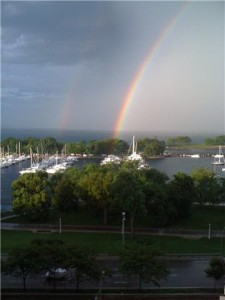