A dear friend arrived Thanksgiving Eve. The plan was to bake the pie and cake Wednesday and reserve Thursday for the turkey. I already pre-prepared the other side dishes. Instead of baking, we came home to cocktails (care of my guy) and a table set with chicken parmesan. I hadn’t seen my friend in six months and she was the first of my friend group to meet the guy. No time for cooking, it was mingling, drinking, and dancing. We ate and sipped cocktails, while she took stock of the guy to report back home. He got brownie points by making an iPod playlist of the best dance songs of the late 80s early 90s. We drank and danced like it was 1999 until 1am.

Thanksgiving Day my friend woke up to a mild hangover and I had the sniffles. We were moving slow. Off to the diner for breakfast and then we’d attack the bird. When we returned home, we remembered we had to bake. We decided to get the caramel cake and sweet potato pie out of the way before cooking the bird. For me holidays are always centered around the action in the kitchen. My apartment really felt like home because of all the hustle and bustle in the kitchen. My friend is an animal lover. Watching and listening to her massage the bird and thank him for his sacrifice for us was hilarious and heartwarming. Taste testing the fudge bourbon balls got the party started early (hint – half the bourbon content next time). There was a bit of chaos when we debated how long the turkey had been baking. I said two more hours. She said half an hour. This bird was either going to be overcooked or severely undercooked. Both bad situations. Thank goodness for modern technology. “We put the bird in the oven when the phone rang. Check your cell.” Only an hour more for the turkey. I think the biggest hit of the night was the dressing and gravy. The dressing is my sister’s recipe and the gravy my belated father’s southern recipe. The finalized menu: turkey, dressing, mashed potatoes & gravy, flank steak marinaded in brown sugar and bourbon, macaroni & cheese, candied yams, collard greens, roasted brussel sprouts, corn muffins, caramel cake, sweet potato pie, fudge bourbon balls, and beaujolais nouveau. 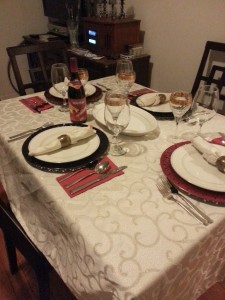 Around 6pm, my guy showed up to make sure the sugar steak was properly medium and helped taste test. We did a good job. Every thing was tasty. We dressed up and sat at a well set table. After all that cooking, we didn’t eat much. Leftovers! An evening stroll through Times Square helped with digestion. Instead of Black Friday, we had the almond brioche at Amy’s Bread – yum! Then an afternoon matinee of the Broadway musical After Midnight. Saturday came too soon. My friend was returning to Chicago. It was a good holiday in my new apartment that felt like home – the sights, sounds, and smells. I was a bit homesick after her visit and ended up catching a cold.

I spent the rest of Saturday putting up my Christmas tree. I searched high and low to find one that would not overwhelm my NY size apartment. I finally found an extra-slim pencil tree. For those that don’t live in NYC, it is like something you’d put in the corner of your foyer. I decorated the tree and hung stockings and wreaths. I sent a pic of my NY pencil tree to my family in Chicago. My six year old nephew replied: “what’s wrong with that tree?”  Poor thing had never seen anything that skinny. I know. Neither had I until I moved here. Christmas music is now on the iPod and the lights give a beautiful glow in the living room and den. It’s beginning to feel alot like Christmas. 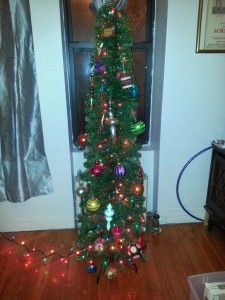 This is my favorite time of year. This weekend I will do some holiday baking to have the apartment smell like home. For me, the holidays are always about warmth and love of family. Watching the young ones play shenanigans and seeing the old ones reminiscence on how this one reminds them of a loved one departed. Laughing, smiling, eating, dancing, and napping. Presents are nice, but the safety and love of my family and friends are the hallmark of a perfect holiday for me.