2019 Update: In 2016 and again in 2018, 53% of white women voted for Trump and Republican candidates despite some being womanizers, a brothel owner, neo-Nazi, and accused pedophiles. In the case of Alabama Republican nominee, Roy Moore, two-thirds of white women voted for him. His Democratic opponent, Doug Jones, won in large part due to the 98% of votes from black women. After Jones’ win, many white feminists flooded social media thanking black women. As Angela Peoples wrote in her NY Times opinion piece, “Don’t just thank black women, follow us.” She later revised that statement to: “Bet on black women. Follow black women. Give power to black women.” Although  white feminists have admired black women’s resilience and strength, they have not stood in solidarity with women of color. As the saying goes, “They want our rhythm [votes], but not our blues [police brutality, race discrimination, lack of representation, objectification].” Over a decade ago, Tarana Burke founded Me Too to help survivors of sexual assault and violence, particularly girls of color. A year ago, a celebrity used #MeToo in a social media post and from then on little attention has been given to girls and women of color surviving sexual abuse. When victims of R. Kelly’s abuse came forward in the documentary, Surviving R. Kelly, I heard no rally cry from white feminists. Black girls and women are considered less vulnerable and “fast” sexually – remnants of a slavery stereotype that black people were hyper-sexual. White women want black women’s full lips, hips, derriere, corn rows, and even our slang (yaas, whew chile, bye Felicia,woke up like dis, talk to the hand, go girl, thick), but not the ridicule or disrespect that caused Sojourner Truth to ask, Ain’t I a Woman? White social media influencers pretending to be mixed race or black is a thing – blackfishing. Yet, these same people are not seen promoting social justice issues that affect women of color. Miss me with that! 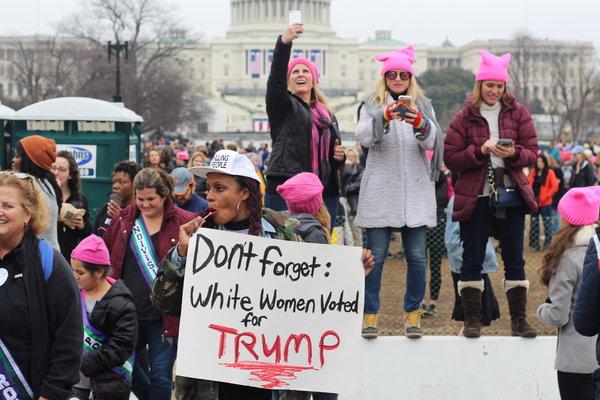 March is Women’s History Month. I have been reticent to call myself a feminist.  I am all for girl power and empowerment. I identify with cultural differential feminists. The problem is that I still wonder whether the feminist circle of sisterhood can incorporate the needs of women of color.

The Women’s Rights movement in America has been tied to the emancipation and Civil Rights movement. To defeat talks of emancipation or dismantling “separate but equal” policies, politicians would tack on a women’s right provision as a prerequisite or negotiating point. Therefore, it typically pitted women’s rights against equality for blacks. Unfortunately, equality for women did not necessarily translate into equality for women of color, especially black women.

White women earn 78% of their white male counterparts. Black and Hispanic women earn even less, 64% and 54% respectively. According to the #ProjectDiane study, “Over 70% of Black households are led by Black women, yet Black women earn only 89% of what Black men earn, and 64% of what white men earn. Nearly two thirds of all non-farming Black-owned businesses are led by Black women, yet Black women received .002% of all venture funding in the past 5 years.” The significance of the #ProjectDiane study highlights the wealth of untapped resources in entrepreneurial blacks and the need for a real commitment in funding and access.

Our contributions to the movement and concerns were pushed aside until they become problems for white women. When black women speak out on inequality or injustice, we are labeled “angry black woman.” When a white woman speaks out, she is brave for taking a stand. Amandla Stenberg spoke about cultural appropriation in her video, “Don’t Cash Crop on My Cornrows,” calling out the Kardashians. She was labeled an angry black girl. TV personality Andy Cohen called Amandla a “jackhole.” Yet, when Rowan Blanchard spoke on the same issue, she was labeled forward thinking and wise beyond her years. The hypocrisy is repugnant. 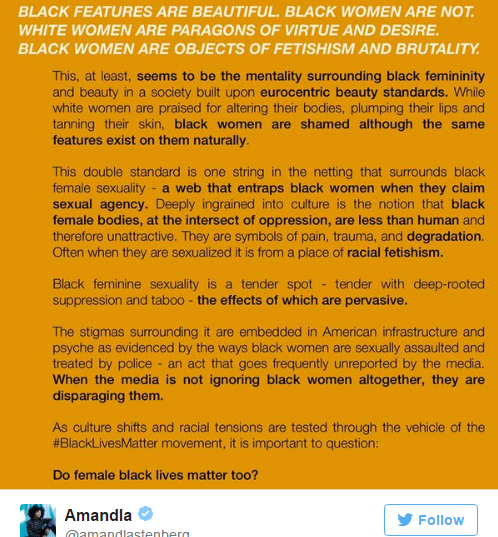 Where were feminists when black teenage girls were accosted by police at a swim party and thrown like a rag doll in school for using a cell phone? Where was the outrage? Like Anarcha and Henrietta Lacks, black women still receive unequal treatment in healthcare. Elementary school black girls are disciplined harsher than black and white boys. When black mothers cried out for rehab instead of prison for drug addicted children, zero tolerance was instituted. Now that heroin has taken a foothold in white suburbia, calls for rehab and gentler sentencing policies are being embraced. Where were these voices when black mothers asked for the same thing?

In 2008, Hillary Clinton cautioned not to vote for Obama simply because he was black. Fast forward to 2016. Hillary and her supporters say that as a woman if I don’t vote for her than I am going to hell. Where were all of these feminists when Sandra Bland died? Where were they when thirteen black women were targeted by a police officer and raped because he assumed no one would believe them? Where were my feminist sisters claiming we would go to hell if we did not support these women?!

I had to laugh when people called Jennifer Lawrence “bratty” and “spoiled” for talking about the pay disparity in Hollywood. I guess that is the white version of calling her “angry black woman” for speaking out and standing up. JLaw, welcome to a taste of our world. I am not saying the inequity is right, not at all. Rather, in the words of Chris Rock, “Black women get paid less than everybody in Hollywood.” Can some of the feminist writers and directors write roles for women of color that does not include the stereotypical vixen, slut, mammy, drug addict, or maid? If Tiger Lily and Pocahontas can be played by white women, why can’t black women crossover? Mara Brock Akil, Shonda Rhimes, Courtney Kemp Agboh, and Ava Duvernay cannot be the only women writing good roles for women of color.

I am down for female empowerment and lifting other sisters up. But is feminism down with me? I do not feel that in its sisterhood that I would enjoy equity of equality. I have experienced enough injustice as a woman of color than to be told to sit in the back of the bus for feminism and wait my turn.

“That man over there says that women need to be helped into carriages, and lifted over ditches, and to have the best place everywhere. Nobody ever helps me into carriages, or over mud-puddles, or gives me any best place! And ain’t I a woman?” – Sojourner Truth