2018 Update: The US government under the Trump administration and Jeff Sessions is trying to use the Bible to justify separating immigrant children from parents. Children have died and been sexually abused in ICE custody. Shame to Christians who fail to call this blasphemy and a perversion of the Bible. As Commonweal magazine noted, “It is always a grave mistake for Christians to align themselves too closely with any one political party or politician, especially with a man who has proudly confessed that he has never asked God for forgiveness. “If I do something wrong, I think I just try to make it right,” Trump has assured us. “I don’t bring God into that picture. I don’t.”

I am still traveling abroad. It has been a little over a month. Originally, I did not plan to write any articles while abroad. I wanted to rest, relax, and reset my mental compass. When in Europe, I spend a lot of time visiting churches. First, they are free for those on a budget. Second, they offer a wonderful lesson in history, art, architecture, religion, and politics. The lesson of religion and politics is the foundation for separation of church and state in the creation of the US. The other day while visiting the Shrine of Our Lady of the Rosary, I noticed “Io sono la risurrezione e la vita” – “I am the resurrection and the life.” It made me reflect on Lent, Easter, and American politics. Even though I am abroad, American politics tend to dominate the headlines here and not in a good way. I do not blame poor rural whites who voted for Trump because historically they have always voted against their own best interests supporting the Republican party. As Representative Ted Lieu tweeted, “[The] reason coal won’t be back is same 35mm film won’t be.” Instead, people chose to believe the lie of “bringing our jobs back” instead of reality.

However, I do blame the good Bible loving Christians who believe that in voting for Trump they have put a representative of Christ in the oval office. For those of you who did not grow up in a Fundamentalist, Evangelical, or Pentecostal church that taught your salvation depended on the way you vote (pro-life, anti-homosexuality, etc), this article may seem foreign because I am speaking in language familiar for my Jesus loving brethren. I grew up in that environment, so I speak from experience. For my Christian brethren, this article is about love.

During Lent, many give up something in acknowledgment of the sacrifice Christ made on the cross. Some people food fast, others give up an indulgence like chocolate or a bad habit. As a girl, I recall a song, “And they’ll know that we’re Christians by our love, by our love they will know that we are Christians.” Previously, I have written about Christian apathy and hypocrisy. I have experienced some of the most racial encounters in the house of God by good Christian people.

Indeed, how can Christians who support Trump say you love God, but endorse a man that defunds programs for widows, homeless, children and elderly? How do you justify the actions of a man that demean women? Mary Magdalene was not demeaned or belittled by Christ. To her, he showed an abundance of mercy, grace, and forgiveness. Yet, good Christians have backed a man that has made racist statements against African-Americans, Latinos, and immigrants. Instead of loving one’s neighbor, he says build a wall. Instead of showing how Christ showed compassion on the masses, feeding them, and making no distinction between Jew or Gentile, he encourages division and separation and is praised for his divisive behavior.

The greatest indictment on Christian character was made by Christ himself when he said, “Woe to you, scribes and Pharisees, hypocrites, because you devour widows’ houses…and have neglected the weightier matters of the law: justice and mercy and faithfulness. For you clean the outside of the cup and the plate, but inside they are full of greed and self-indulgence…For you are like whitewashed tombs, which outwardly appear beautiful, but within are full of dead people’s bones and all uncleanness…So you also outwardly appear righteous to others, but within you are full of hypocrisy and lawlessness.” 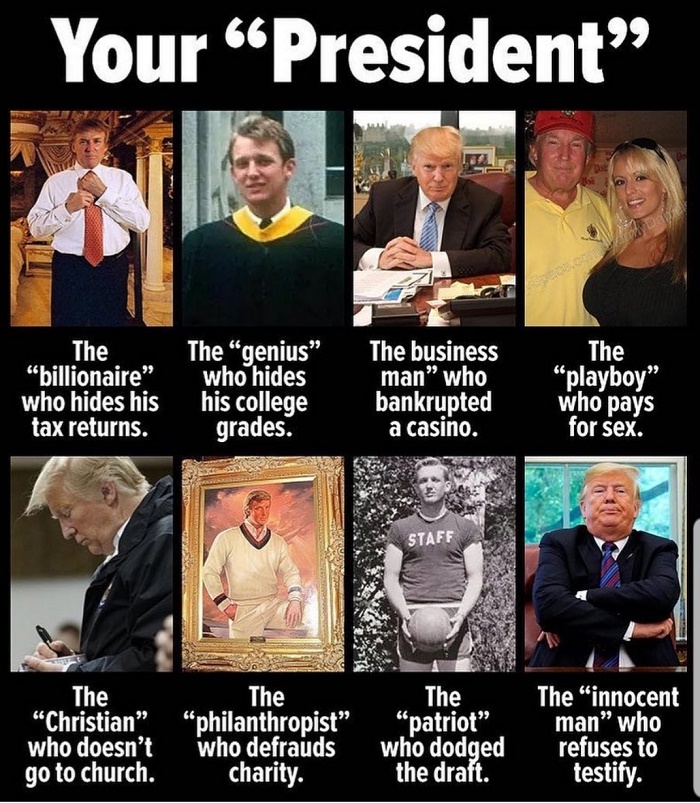 Trump’s reason for election is “what do you have to lose?” He lies regularly. To deflect from his constant stream of lies he yells “fake news” and declares his version “alternative facts.” Talk about people who would rather believe a lie than the truth! Instead of focusing on the truth, he insists we instead punish the leakers. There is a reason America has a Whistleblower’s law – to make sure those working inside the government report misconduct, waste, fraud and abuse. This is to keep government honest.

Trump’s administration and policies are best described by Republican Senator Margaret Chase-Smith, who in response to McCarthyism said, “It is a national feeling of fear and frustration that could result in national suicide and the end of everything that we Americans hold dear…[R]ecently that deliberative character [of the United States Senate] has too often been debased to the level of a forum of hate and character assassination sheltered by the shield of congressional immunity…Today our country is being psychologically divided by the confusion and suspicions that …spread like cancerous tentacles of ‘know nothing, suspect everything’ attitudes.” She concluded, “A Republican regime embracing a philosophy that lacks political integrity or intellectual honesty would prove equally disastrous to this nation. The nation sorely needs a Republican victory. But I do not want to see the Republican Party ride to political victory on the Four Horsemen of Calumny — Fear, Ignorance, Bigotry and Smear. I doubt if the Republican Party could — simply because I don’t believe the American people will uphold any political party that puts political exploitation above national interest. Surely we Republicans aren’t that desperate for victory.” Apparently, the Republican party and Evangelicals are that desperate because the four horsemen are present in Trump, Bannon, Spicer, and Miller, national interest be damned.

Trump’s policies are a direct contradiction to what Christ commands. I am ashamed to use the word Christian for it feels dirty and defiled by those claiming Christ but whose action and deeds are hypocrisy. “But you have dishonored the poor. Is it not the rich who are exploiting you? …For I was hungry, and you gave Me nothing to eat; I was thirsty, and you gave Me nothing to drink; I was a stranger, and you did not invite Me in; naked, and you did not clothe Me; sick, and in prison, and you did not visit Me. Lord, when did we see You hungry, or thirsty, or a stranger, or naked, or sick, or in prison, and did not take care of You?’ Then He will answer them, ‘Truly I say to you, to the extent that you did not do it to one of the least of these, you did not do it to Me.’”

Christ commanded that we look after the poor, widowed, and fatherless. Yet Trump’s policy is to punish “the least of these” at home and abroad. In his domestic and foreign policies, there is a disdain and lack of respect for humanity. How do those who claim the name of Christ reconcile this incongruous dichotomy?! It sickens my heart and weakens my soul. Just as Newt Gingrich and his Contract with America sullied the term “family values,” so too have evangelical Trump supporters soiled the term “Christian” for me. What about Apostle Paul’s love sonnet in I Corinthians 13? “If I speak in the tongues of men and of angels, but have not love, I am a noisy gong or a clanging cymbal. Love is patient and kind; love does not envy or boast; it is not arrogant or rude. It does not insist on its own way; it is not irritable or resentful; it does not rejoice at wrongdoing, but rejoices with the truth. Love bears all things, believes all things, hopes all things, endures all things. So now faith, hope, and love abide; but the greatest of these is love.”

Christians, where is the love? Lent and Easter reflect God’s greatest gift to humanity, “for God so loved the world that he gave his son.” How do you love God whom you have not seen but embrace a man who incites racism, hatred, and defunds programs aiding “the least of these?” My feeling toward Christians who support Trump can best be summed up in Dr. King’s statement.

“I must honestly reiterate that I have been disappointed with the church. I do not say this as one of those negative critics who can always find something wrong with the church. I say this as a minister of the gospel, who loves the church; who was nurtured in its bosom; who has been sustained by its spiritual blessings and who will remain true to it as long as the cord of life shall lengthen.” — MLK