“You are angry, no? Your passion empowers your words.” My writing mentor wrote this after reading my article, Superwoman Has Left the Building. I published that article sitting in a terminal at O’Hare airport waiting for my flight to Milan. I was running away to Italy for two months to restore my sanity and faith in humanity. I also planned a long weekend excursion to visit a friend in London. My friend is one of those phenomenal women who never fails to inspire me with her compassion for humanity. I met Jeta Bejtullahu, aka Jeta B, when I moved to New York City following my dream to become a writer. Jeta was in NYC following her passion of being a brand photographer and visual storyteller after working in human rights for victims of rape and violence as a result of war crimes.

Jeta’s spirit is effervescent. Her diminutive size contradicts her larger than life will to live and believe the best in the human race even in these troubling times. When I met her at a women’s networking event, she proclaimed that we would conquer NYC. Her commitment and support of my dream was unfailing. I am notorious for not smiling, yet Jeta manages to bring out the best in even me. Most of my headshots and photos are Jeta creations. She has an eye for the unique, quirky, and making your idiosyncrasy a trademark. When I told her that I was visiting Italy, she extended an invitation to visit her beloved Brighton. Even in NYC, Jeta waxed nostalgic about Brighton. Skeptic and American that I am, I wondered how could someone be nostalgic about London fog and overcast skies.

After six weeks in Italy and an impressive tan (my melanin was poppin’), I was not thrilled to go to London. I wanted to see Jeta, but I was warned not to expect to see the sun or warm weather. I am a sun, sand, sea lover. Italy was unusually warm for March and I was not ready to be cold in England. Nonetheless, I wanted to see Jeta so I packed the sweaters, thermals, and umbrella I brought specifically for my London excursion. When I landed at Gatwick airport the sun was shining. I was not buying it. I figured it would be a matter of minutes before a shower or gray skies would roll in. To add to my apprehension, I was deflated when I exchanged my euros for pounds. I received 46£ for €70. So much for a depressed pound after Brexit that I was relying on. I nearly fainted. I wanted to board a plane back to Italy. I certainly would not be shopping in England. I hopped a train to Brighton. The gods must have smiled on me because not a cloud in sight and the sun remained high. As the train rolled through small towns, the landscape was picturesque like a Jane Austen novel. 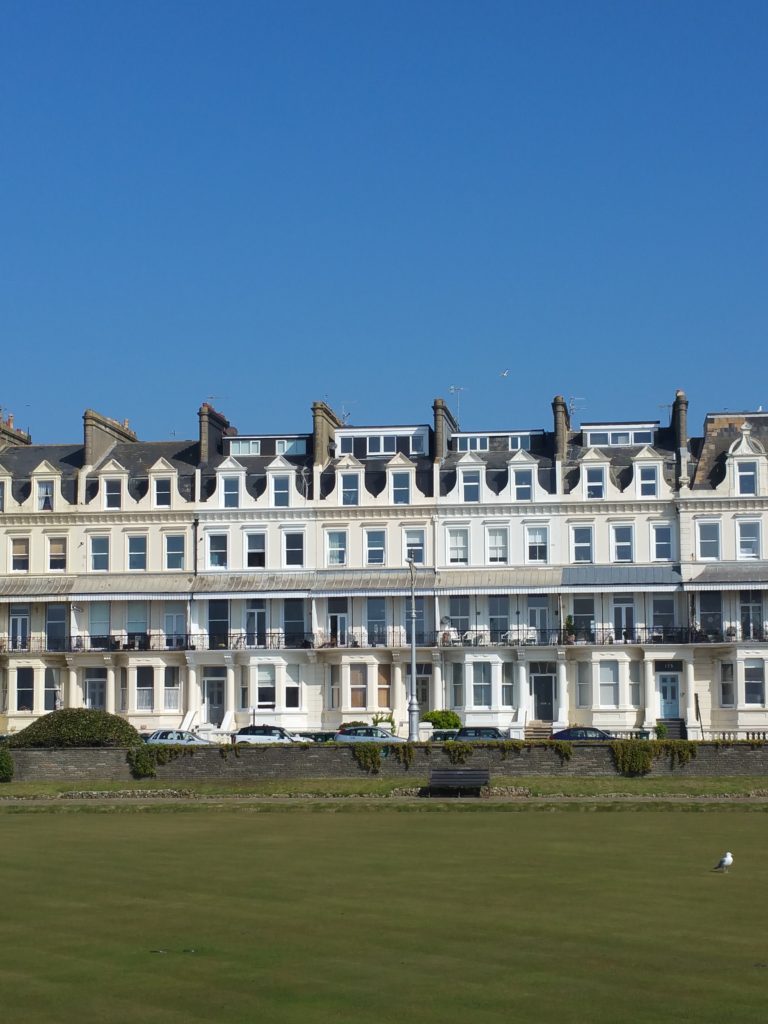 Jeta met me at Brighton station. We hopped on a double decker city bus for her apartment. As the bus drove through Brighton, it was idyllic. It reminded me of when Oliver Twist went to his family’s home and the rowhomes were white and streets so clean and manicured. The architecture was simply stunning. As we exited the bus at the promenade, an English garden welcomed me with a view of open water. I looked at Jeta, “This is your view!” She smiled slyly, “Wait till you see view from the apartment.”

We walked towards Hove beach and entered a stately building. The foyer was elegant and the architectural detail regal. My reflection was interrupted when I realized that I had to ascend the regal staircase. My overweight American self nearly died panting like a pig running from the slaughterhouse as I climbed her five-flight walkup, no lift. As she took out the keys to the apartment, I took in deep breaths thinking at least I’d lose some weight walking up and down the stairs. Once Jeta opened the door, I was instantly envious. I blurted out, “From here you can see forever.” It was the perfect artist/writer space with a view of open water and the Brighton pier. I am an introvert and my ideal is to be a reclusive writer. This apartment was perfect. It was on the top floor, perched like a bird above the city. I could people watch and listen to the waves as I typed away finishing my unpublished works of art. Jeta smiled. It was her haven, a room of her own and a room with a view. I was jealous for a moment, but grateful that someone like Jeta could enjoy such a view. It was sun drenched and the sea stirred inspiration, my muse. The smell of the sea alone lured me to a seat by the window. It was going to be a natural hair weekend, untamed like the sea, frizzy afro and all. 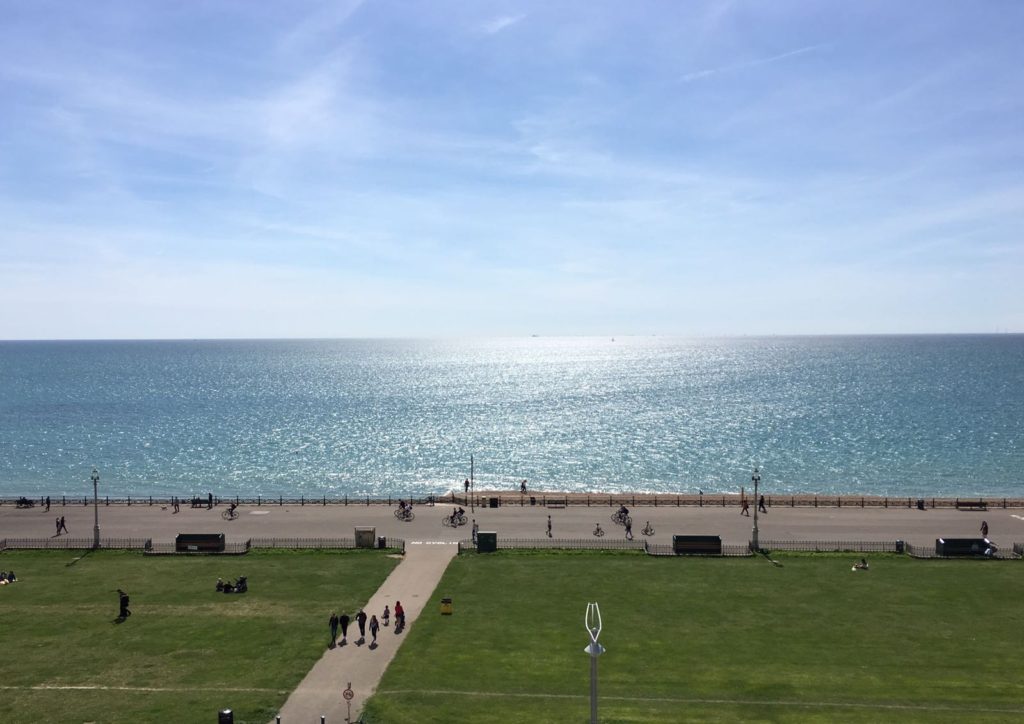 I was jetlagged from sleeping in the airport to make my redeye flight. However, that view was an instant shot of Vitamin C and D. Afraid that the sun would disappear to unveil grey skies, I said “Let’s not waste daylight. Show me your town!”

Brighton’s beach and promenade has long been a weekend getaway for Londoners. It is joked that Londoners date someone from Brighton simply to have a place to stay for weekends. Brighton’s fame is not undeserved. The homes and buildings are dignified and glorious, a proper English town. However, the stately buildings do not tell the true story of Brighton. Brighton is a creatives’ paradise and has long been LBGT friendly. That may have something to do with George, Prince of Wales, making Brighton his getaway from London courts before becoming King George IV. His residence, the Royal Pavilion, is eccentric. It is now a public garden, but it looks like a mini Taj Mahal. Street artists and musicians abound. 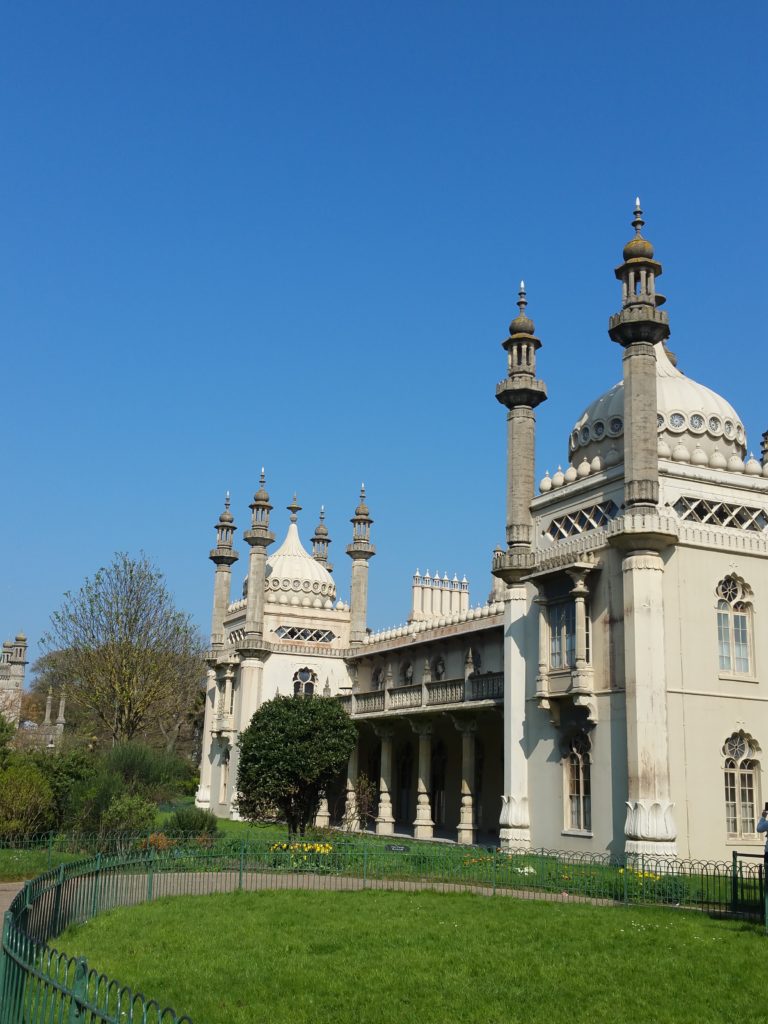 As we walked towards the pier, a musician played Sweet Home Chicago. Look at Brighton serenading this Chicago girl. Big box stores are shunned. In Brighton, local and environmentally conscious is a way of life. Away from the promenade are streets reminiscent of Diagon Alley with vintage and second-hand stores with clothing, jewelry, and furniture. The pound was too strong so my will to shop till I drop was curbed by economics. I did window shop gleefully. 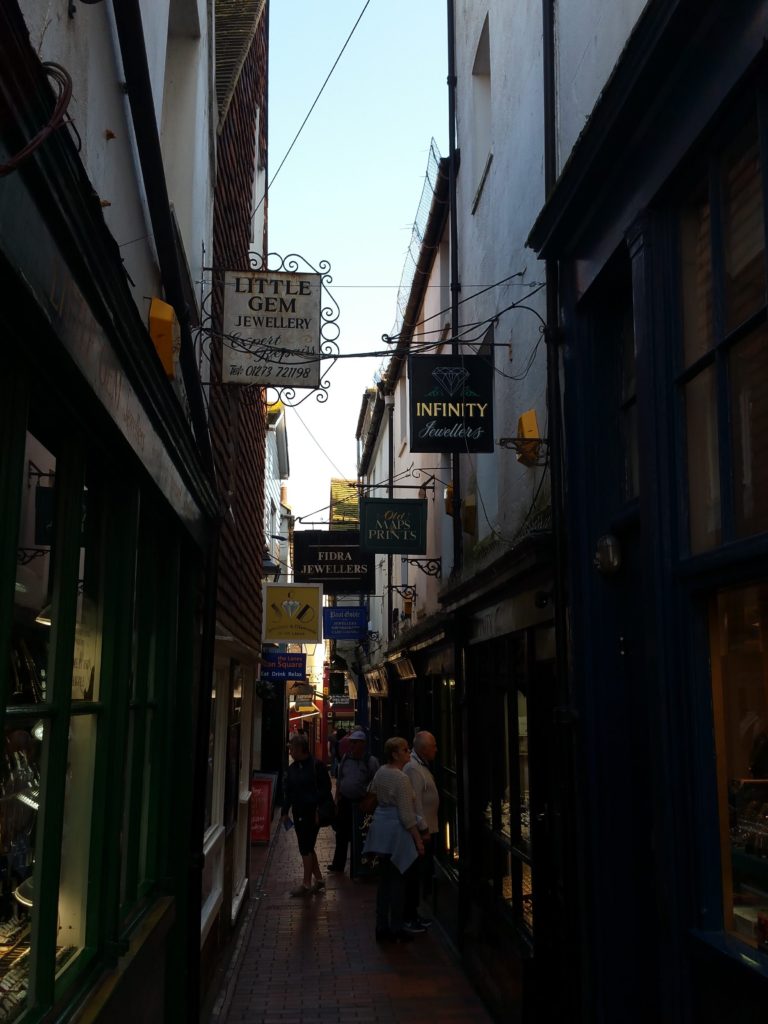 That evening, Jeta promised to make a proper Brit of me. We sat on the pebbled beach with a bottle of prosecco and crystal stemmed glasses watching the sunset and the moon rise with lovers dotted along the beach for a postcard perfect moment. That was when Brighton stole my heart. The entire weekend was sunshine. I explored the Hove and Brighton boardwalk. Hove is a precious gem with colorful beach huts. 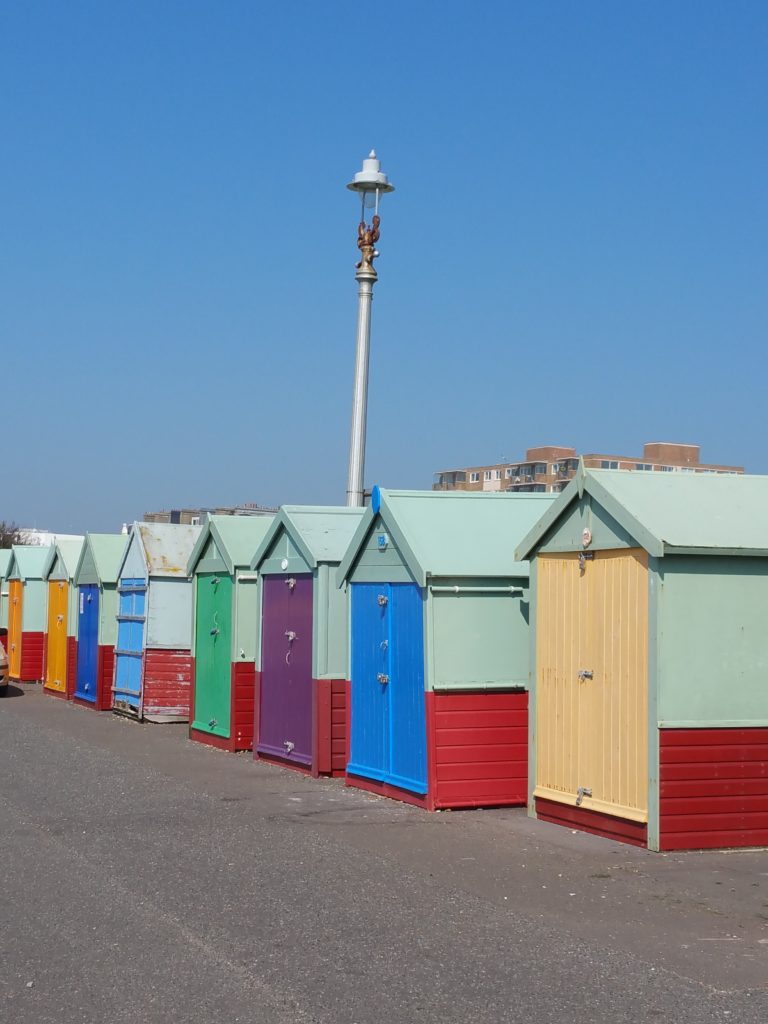 I returned to the apartment to get ready. Jeta wanted to introduce me to Brighton’s Lindy Hoppers. Although Lindy hop started in Harlem as an African American dance form, it is rarely seen in America unless in Broadway musicals or movies about the Cotton Club or the Savoy. Like blues, African-American artforms find new life in Europe. In Brighton, Lindy hop was alive and well. A contemporary beer hall was the setting for the evening. Tavern patrons paid no mind to the poodle skirt clad, oxford saddle shoe wearing dancers who ranged from twenty-something to seniors. Some dancers where tattooed like a miscreant motorcycle gang but that only added to the charm. One dancer was folk singer, Sharon Lewis. Another dancer was a former house music DJ for a major record label. Her husband spinned the music while she taught newcomers. Occasionally, he would come from the behind the DJ stand to dance. His moves were smooth and relaxed. He was like the cool cat in the movie Swingers. That’s the beauty of Brighton. It is a mixed bag. You never know who you’re going to meet.

“Brighton, Hove actually” as locals say, is not trying to fit the norm. It welcomes freaks, geeks, and the fringe. We ate dinner at Holy Pho(k). When I read the menu, I knew that Brighton would be on my “visit frequently” list. The upper right corner of menu’s FAQ was Oscar worthy. 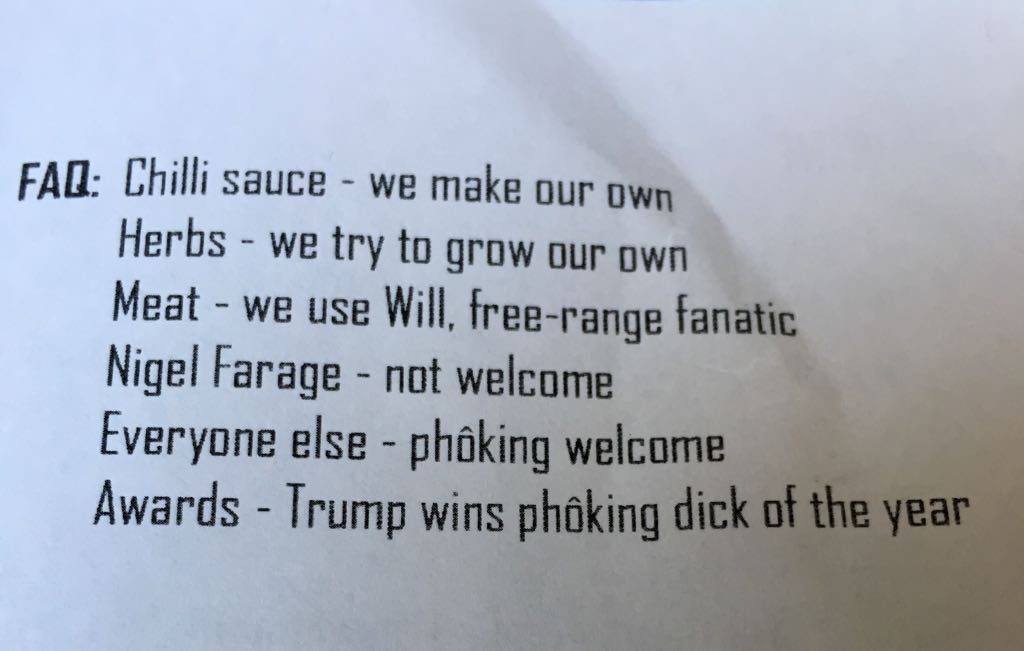 That Sunday was the Brighton marathon and Jeta’s room with a view provided the best vantage point. We took in Sunday roast at Hove Place. I had a new favorite cider. Old Mout Cider’s Pomegranate & Strawberry is a summer must! I also learned that although British cuisine leaves much too be desired, Sunday roast is something the Brits do well. As the sun shined brightly, I continued to work on my tan in the outdoor garden being very American, relaxing too much. My trip to Brighton taught me this. I need to marry someone with land and title to get my room with a view to publish my epic work of nonfiction. Unlike Virginia Woolf, I do not have a room of my own. Therefore, I need a sponsor. On a serious note, Brighton stayed sunny and warm my entire visit. I thoroughly appreciated the artistic vibe and energy. It was invigorating.