While at the Toronto International Film Festival, I had a chance to catch the screening of Grace Jones: Bloodlight & Bami. For the life of me I can’t understand why she wasn’t in the Wonder Woman movie. I am hoping that Marvel’s Black Panther gives her a cameo. She is virtually synonymous with strong, independent, warrior woman. Grace is the original #blackgirlmagic and #melaninpoppin.

I was invited to the Toronto International Film Festival (TIFF) as a guest of André Leon Talley for the premiere of The Gospel According to André. I had a one-day press pass and wanted to take full advantage of seeing as many screenings as possible. As luck would have it, the press screening of Grace Jones: Bloodlight and Bami was the day of my pass. Aside from Ms. Jones being a friend of André from his days at Interview magazine and jaunts at Studio 54, she was my she-ro/hero.

As a young girl, besides Solid Gold and Soul Train, you rarely saw black people on television with any frequency. When they did, typically the black woman was fair skinned. I was always teased for my big lips. When Grace Jones appeared on the disco scene dripping chocolate with full lips, I was mesmerized. I believed that Grace Jones was the true leader of Amazon women, the Queen Warrior of Themyscira that Linda Carter aka Wonder Woman answered to. Her stature alone commanded attention, tall and lean. Her facial expressions were piercing, like she could see into your soul. There was a rawness, soft and hard, masculine and feminine, edgy, and sexy. She seemed so comfortable and uninhibited in her skin and her blackness. Grace Jones was #blackgirlmagic and #melaninpoppin before the terms and Twitter existed.

Jay Z rhymed that “he be’s the block.” Beyoncé replied that she’s “the light that the keeps the streets on.” Grace Jones said, “Fuck the block. I’ve been around the globe.” Bow down to the originator, the maven provocateur, and style innovator. Helen Reddy sweetly sang “I a woman hear me roar.” I imagined the roar to be Grace Jones eponymous growl and facial expressions. Grace Jones, queen warrior, sex personified, trend sitter, slap you in your royal face for trying to put her in the corner. 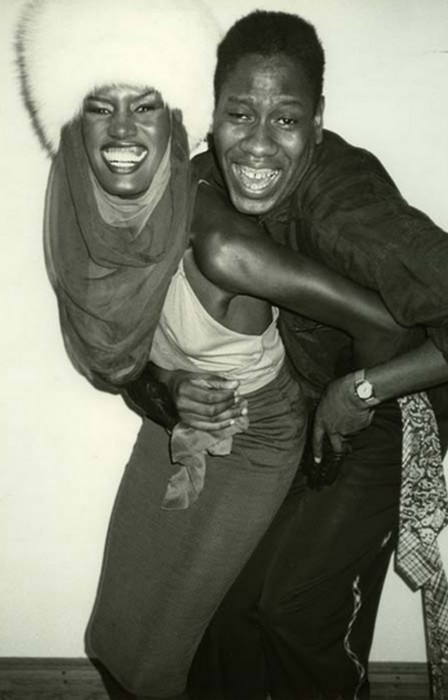 The documentary gives us a glimpse into the softer side and makings of Grace from a young girl in Jamaica before she stepped on the disco scene. We start with her at home in Spanish Town, Jamaica. At first glance, I am confused. Who is this person speaking in Patois? She has locs and a scarf on her head. Then she speaks in English. It is Grace seeming so normal and human. She is a daughter at home visiting her mother and hanging with her relatives eating local fare. She is in auntie mode showing her niece and son their cultural roots, drinking coconut water on the side of a dirt road.

Then we see Grace the artist in the studio. She is having a problem because a producer did not show up. Cut to another scene at a hotel where they want her to perform but mere hours before the performance executives have not signed the contract. She refuses to leave the hotel until she has a signed contract in hand. That’s when she exclaims, “I’ve been around the block before. Fuck the block, I’ve been around the globe. Sometimes, you have to be a high flying bitch” to get things done. Then cut to a concert with her singing Pull Up to My Bumper.

The documentary does a wonderful job juxtaposing the soft with hard. You get to see Grace’s humanity – mother, doting grandmother, loving daughter, supportive sister, and kick-ass aunt. As the film crisscrosses around the globe, she seamlessly goes from Patois to English to French. You see her strict religious upbringing and brutal beatings from a step-grandfather who took literal “spare the rod spoil the child.” The physical abuse she suffered as a child makes you wonder how she is normal and functioning in the world. Who survives that type of abuse without hating the world? That is Grace – resilient. Even when talking to the father of her child, Jean-Paul Goude, you feel the passion and young love that existed between the two. It is a very intimate moment. This softer side of Grace makes you want her to adopt you. This is Auntie Grace.

Grace Jones: Bloodlight and BAMI is pure energy, fierce, and empowering. When the film cuts to her singing Nipple to the Bottle, I was like hell yeah no time to be your superwoman. If you want a rock-n-roll, sexy, feel good, empowering film, pull up to the theater in your most audacious outfit and get ready for the Grace Jones experience.