I was in a junior in high school when a couple of guys in my physical education class decided to act like they were playing Olympic level racquetball. Class was over, but they continued. As I walked to the exit, a ball hit the back wall and hit me straight in the eye. The doctor said that I had a corneal abrasion and after an eye exam informed me that I was near sighted. All this time I thought that no one read the bottom lines of the eye chart. From then on, I accepted that the fact that spending a hefty sum for eyecare would be my norm. As an adult, I switched between glasses and contact lenses. However, many employers do not offer vision coverage so paying out of pocket for eye exam, prescription glasses, and contacts became a toll.

Fast forward to December 2016. While attending artist Raub Welch’s annual Afro-Christmas holiday sale, I met Meagan McNeal. You may know her from The Voice, but I was introduced to her from one of Raub’s marvelous parties where she performed Ella Fitzgerald’s Summertime and Chaka Khan’s Tell Me Something Good. I started following her on Instagram ever since. She can sing, but have you peeped her glasses game. I went up to Meagan and congratulated her on The Voice. Then I told her, “I love your glasses.” She replied, “Only $6.95.” I responded, “You lie!” She said, “Zenni Optical girl, so long as you don’t mind not having a label on your glasses.” I just spent $400 on cheap frames at a national optical center and Meagan had glasses to envy for just $7. For what I paid for one pair of glasses, I could have had multiple pairs in every color of the rainbow!

How is it possible to get prescription glasses for $7? I spent all these years paying over $1000 a year on my eyecare and there was a more affordable and stylish alternative! For the next few days, I stayed on Zenni Optical’s website. Because I practiced law and was typically in court, I kept my eyewear conservative. However, as I was moving away from the practice and embracing my creative writing side, I wanted to show more of my personality and flaunt some color. 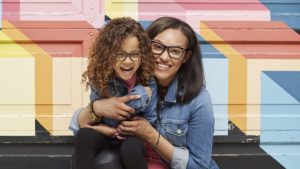 I had over 20 glasses in my favorites, most ranging from $7-28. Then I remembered that my recent eye appointment delivered a life blow. As a woman approaching a certain age, my eye doctor recommended that I transition to progressive lens. The beauty of Zenni Optical’s website is that you can search by style, shape, color, and type of lens. After I narrowed my search to frames that worked for progressive lens I still had a nice variety. Although I had always worn rectangle frames, I decided to go out of the box – cat eye frames. I searched for red, blue, and purple. I decided on a blue cat eye frame until I read the review, and someone said they purchased the frames in red and bought a lipstick to match. Well, lady in red I am!

If you need prescription glasses, it will be necessary to have your eye prescription. Additionally, you will need to know your PD (pupillary distance). If you ever wore prescription lenses, this is when they take out a measuring stick and measure the distance between the center of your pupils to make sure it is centered properly within your frames. Most eye centers will not tell you your PD. Some will charge you for this information, one provider told me $40. Fortunately, Zenni Optical has a tutorial and downloadable ruler to assist you. Tip: Don’t let your printer scale the image or it will not measure properly. 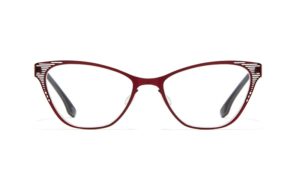 Zenni’s website is informative and user friendly. The blue question marks inform you why something is necessary. Additionally, I spoke with a customer service representative while placing my order who was knowledgeable and extremely thorough. The process was simple. The only problem was finding my PD because I assumed that where I previously ordered glasses would provide it, but they refused to give me the information. Another eye care center wanted to charge me $40. Therefore, I had to download the Zenni PD ruler. Unfortunately, the first time I did it my printer scaled the image so that the ruler was off. I had to reprint the image unscaled. Other than that, I had no problems placing my order.

For over twenty years, I have spent over $1000 a year on glasses and contact lenses. When a niece or nephew broke a pair, I would wear my old prescription because they cost too much to replace. Also, if your family wears glasses that cost is compounded. Zenni offers glasses for the entire family including kids. With prices as low as $6.95, you can afford to get everyone a couple of pair of glasses. I already have plans to get some prescription sunglasses and a pair of glasses in purple and blue.

Zenni Optical is a game changer. 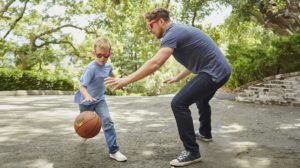