2019 Update: In his address to the United Nations, Trump pushed nationalist rhetoric.

The world has gone mad as we collectively decide that nationalism is more important than humanity. In the age of the greatest technological advancements in our history, mankind has decided to revert to anachronistic ways of isolationism and separatism. We are a global economy and interdependent upon each other. Ironically, the countries who went on imperial conquests in Africa, Asia, and the Americas, pillaging natural resources and making natives second class citizens in their own country in the name of colonization, now claim they are under threat of immigration. Even worse is that these same western democratic countries were pivotal in creating the migrant crisis by backing nondemocratic regimes and dictators forcing migrants to flee. The European Union, Italy in particular, paid Libyan dictator Muammar el-Qaddafi to stop the flow of immigrants to Europe. Europe’s fear of migrants is exhibited in nationalism. Albert Einstein said, “Nationalism is an infantile disease, the measles of mankind.”

It is now that Russia’s true agenda in infiltrating and hacking elections in the US and around the world is made clear, divisiveness. Divide and conquer! A divided America at odds with its allies, England’s Brexit, and Europe’s return to nationalism over migrant refugees leaves a weak United Nations with Russia alone as the stable force in the world. The plan is perfect in its simplicity. No need to deploy nuclear weapons. Simply use social media as a weapon of mass destruction against democracy to stoke fear through nationalism. While the rest of the western world is distracted with the measles of nationalism, Russia is free to orchestrate its own world agenda. 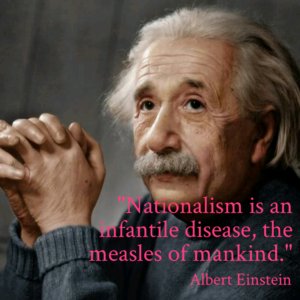 In his eulogy of Senator John McCain, former President Barack Obama said, “So much of our politics, our public life, our public discourse can seem small and mean and petty, trafficking in bombast and insult and phony controversies and manufactured outrage. It’s a politics that pretends to be brave and tough but in fact is born of fear. John called on us to be bigger than that. He called on us to be better than that.” Meanwhile, two white men attempt to throw a young man of color off a San Francisco light rail train for playing loud music. In Trump’s America, blacks, Latinx, Asians, and Muslims alike are harassed. A professor told an Asian couple to go back to their country for causing the “displacement of European-Americans.” Under Trump, climate change is not real, kids in cages is Christian, and equal opportunity racism is promoted because white nationalists who assaulted DeAndre Harris and drove a car into a crowd that killed Heather Heyer were “very fine people.” The US made bedfellows with African, Central American, and South American drug lords and dictators, destabilizing those countries. And like its European counterparts, the US now claims to have an immigration crisis.

In Italy, Daisy Osakue, a track and field athlete, had eggs hurled at her injuring her cornea. In the German town of Chemnitz, Gerde Schmidt said, “I’m used to the neo-Nazis, but not seeing my neighbour or the plumber mixing with them in broad daylight.” The Guardian notes “the family of Daniel H has expressed its dismay that his death has been used by the far right to mobilise support, not least because, being a German-Cuban, he had himself faced considerable racism in his lifetime.” “These rightwingers,” one of his school friends has written on his Facebook page, “are the very people we had to fight against when we were younger because we didn’t look German enough to them.” In Sweden, “a country that has long prided itself on being perhaps Europe’s most liberal and open to migrants, popular concern over migration looks likely to propel the populist, far-right and anti-immigration Sweden Democrats to a possible 20% of the vote.”

There is a sort of genius to Russians using our love of social media as a weapon of mass destruction to propagate hate and fear in democratic countries. While western democracies fight over the ideology of patriotism and nationalism, Russia basks in the discord. In the end, the disease of nationalism is a virus to democracy.