My urge for travel has me reminiscing about my last vacation, four years ago in Prague.

Prague Day Three (Sept 20th)
Up at 5:45am – you’re on vacation stop waking up early.  Too late.  Breakfast isn’t served until 7am.  Croissant, boiled egg and grapefruit tea.   At breakfast, I meet three Americans – two from Chicago, the other a former Chg resident.  The one is visiting her daughter.  Her daughter took her to dinner with the Ambassador last night.  We joke that it won’t be long before he’ll be out of office if the Democrats can get their act together for 2008.
Off for a morning walk to get the lay of the land before the tourists wake up.  Oh my goodness, it’s cold.  I need a scarf and gloves.  Finally, a shop opens and I purchase a pashmina scarf to blend.  Only $15 for the pashmina – first deal of the day.  I refuse to buy the gloves since they are more than the pashmina – rip-off.
Thank goodness I partially memorized the map before coming here.  Uh-oh.  I’ve wondered off the tourist path and possibly lost.   No stop retrace – okay I have my bearings and most run to Old Town Square for my four hour Best of Prague Walking Tour.  There are 12 people in the tour – mainly Brits and Aussies.  However, there are two other Americans who are living in . I’m immediately jealous and her shoes!  Are those Hispanitas?!  I love Hispanitas but hard to find in the States.  She thinks she’s cute.  Okay Ronda, be honest.  She is chic and pretty. 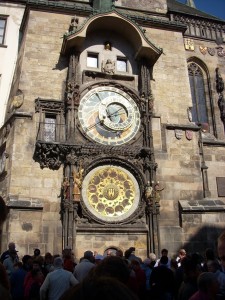 We start in Old Town Sq by the Astronomical Clock then to .  Next, we go to St James to see the cut-off hand in the church (something about a thief and the virgin miracle statue).  Stop the tour, I see fur!  Note location to return later.
Ms. Chic approaches.  Turns out she lived in Chg for 11 yrs before heading to .  We chat Chg and the poor value of the dollar.  Wait, I’ve found the Estates Theatre and I need to get tickets for Mozart.  The tour is moving on must return later.  Shame Ronda for pre-judging.  Ms. Chic is cool.  We talk about life in .
Hold on – sensory overload.  The sun is out and this place is beautiful.  At the hotel and in the square the Europeans were saying that is the new , but better.  Can this be true?  All I know is that it is so beautiful I don’t know if I’ll be able to capture it all.  We walk on down Celetna St (my pocket guide mentioned good shopping on this street).  Off to the Jewish quarter, but first we walk down Paris street.  Very much like Rodeo Dr or Mag Mile in Chg.  Hermes!!!!!   I have to go in later just because.  The history of Jewish town reminded me of strength, determination and resilience in spite of horrible circumstances.
Now off to – crowds, vendors, tourists.  Two hours of walking and we take a break before heading to .  The guide suggests cafes off the main street or a kaverna that has Pilsner for 25 crowns.  The Brits head to the kaverna.  Ms Chic, her husband and I find a cafe on the square.  I order the goulash because there is still a chill in the air.  We all order a small pint of Pilsner – when in drink what they drink.  I’m not a beer person so I leave my glass half full.  Ms Chic and her husband just came from and they are beer drinkers.  They are amazed that by the end of the meal my beer is still in the glass.  It turns out Ms Chic’s husband works for the US government.  (Note to self, no Bush bashing I may end up on the watch list).  was very cold but Ms Chic said great beer that even I would enjoy.  One with cinnamon and honey – sounds like tea so I probably would like it.  Her husband gets a call and speaks in Spanish – something about arrests (My Spanish is okay enough to eavesdrop).  Ms Chic and I chat more about and Chg.  We talk occupations.  (I know this is going to end up on my FBI file – careful Ronda not so overt with political opinions). 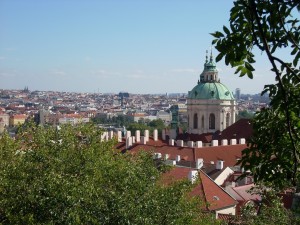 We re-join the group, off to .  Beautiful, magnificent does not describe.  Ornate, jaw dropping.  If this is earth, heaven must be seven times more beautiful.   Pictures.  Ms Chic,  her husband and I have bonded.  The tour ends and we shop.  We stop to rest our feet and have caffe and pastry.  More shopping and then we stop for wine and cheese.  It’s 6pm.  The waiter doesn’t seem to be concerned with time because bread comes out.  Half an hour later the wine arrives.  45 minutes later the cheese and grapes arrive.  We’re on a rooftop terrace that overlooks Old Town Sq.  The sun is setting – very romantic.  We let down our guards.  Ms Chic is upset by the constant phone calls her husband is getting.  We talk foreign policy. 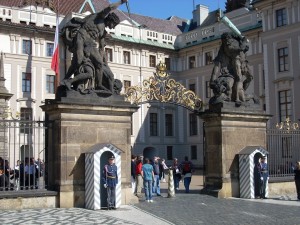 It’s 9pm and we’re hungry so  we order food.  At least an hour before that arrives but in the meantime they order another bottle of wine.  I told them I’m a one glass girl and they comment that I’m a cheap date and for goodness sakes it’s been three hours since my last glass.  Have a glass of wine or I’ll choke when the food arrives.  I agree.  We talk Spanish siesta, customs, culture.  We move on to human trafficking, the KGB and Russian mafia.  Wait.   Fireworks over – romance in a bottle!  It’s 10pm, food arrives.  We talk more foreign policy, then shopping and next day’s agenda.  We agree to meet at the Mozart concert.  It’s 11:30pm and I wander the square back to the hotel. Thank goodness I have the pashmina to knock off the night chill.  A great day and made me forget about my luggage.