Menu
Facebook Twitter Instagram
So naturally the first thing you do is get a pair of high fashion rain boots.  Just because a hurricane is coming is no excuse to look awful. I beautifully maneuvered the shoe department at Lord & Taylor (or Loud & Tacky as my roommate calls it).  Turns out Lord & Taylor was having a pre-Labor day sandal/boot sale.  So Hunter/Coach/Chooka rain boots were at deep discounts and this girl shops clearance.  Because I’m frugal I initially picked a pair of Chooka on sale for $44, but the Coach poppy rain boots were $44 too.  I also picked out a wedge heel rain boot from Hunter (preferred brand of NY “evacuistas”).  The young sales girl figured my frugality and pointed out that four styles of Hunter were on sale too ($99).  Though the Coach poppy boots were cute, I’m not a pink girl.  My big calf legs meant the Hunter boots won.  I hate to miss a sale of $44 but Hunter felt better and I rocked in them!  Two snaps up… 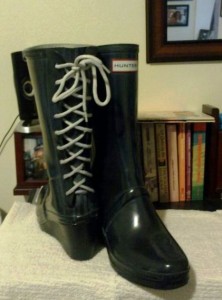 A woman working with me (my nickname for her “throw mama from the train”) went to the hardware store and paid $35 for a FLASHLIGHT.  For an extra $10 she could have had some fabulous boots.  Since I spent my hurricane survival budget on boots, I decided old school candles would do.  Plus, every Walgreens/Duane Reade was sold out of flashlights.
Happy with my fashion/hurricane purchase, I figured if it is going to be horrible go get some survival food.  So I went to Amy’s Bread.  The place looked like it was robbed.  The clerk said the hurricane of people hit early.  I needed extra ginger snaps (my usual weekend treat to myself), enough to survive Irene.  Where is my Delice (love triple creme brie)?! All out.  I told the guy I needed a good cheese to survive the hurricane.  He suggested Camembert with mini baguettes.  A customer mentioned several stores sold out of water and she suggested filling the tub with water.  Let’s not be crazy. Some people’s tubs are dirtier than their toilets. Hope they clean the tub before using it as a water reservoir.
Realizing that I purchased hurricane boots and food but no water, I headed to Duane Reade.  They were out of water.  Thank goodness I’m an auntie of six and come from a large extended family because those skills were key.  I went to the baby aisle and picked up three gallons of nursery water.  Don’t look at me that way.  Babies can nurse – they don’t need water.    I stopped by the Amish market for pedestrian food – jelly, peanut butter and bread.  They were sold out of bread so I bought spinach/artichoke dip.  Yesterday I went to a fabulous fish market and bought jumbo lump crab.  Tonight I’ll mix that crab with the spinach/artichoke dip and party like it’s 1999 (time to get the Prince mix tape out)!  I should get a bottle of wine but don’t want to be like Marie Antoinette “let them eat cake.”

For Saturday,  I will shampoo and blow dry my hair, put on my Hunter boots, eat Camembert with a mini baguette and people watch out the window.  Just another day in NYC.