I am now a New Yorker.  However, on 9/11/2011 I am not. I was not here on 9/11/2001 to experience what New Yorkers endured.  I vividly recall where I was and what I was doing when it happened.  I was working as a contract attorney for a large law firm in Chicago that was headquartered in NY at the Twin Towers.  We were at the client’s site near O’Hare airport.  We had a radio on when report of the first airplane attack was announced.  At first we thought it was a hoax or some movie set mishap.  The paralegal said she’d call a colleague working in the tower to confirm.  Her colleague confirmed that what we heard was indeed true.  She was in the second tower but said they were told not to evacuate.  I remember the other attorneys and myself urging her to tell her friend to get out.  A few minutes later the call ends with her colleague in the second tower, it is hit.  Because we were near O’Hare airport, the firm told us to go home.  All airports were being shut down.  I called my parents, they heard what was happening went to the store to stock up on supplies in case of a lockdown/curfew and said that everyone should meet at their place.  I never knew what became of the paralegal’s colleague.  We never returned to work, the project was over.  The firm lost many employees in its NY location as a result of 9/11.  Those are my memories of what happened within the first few hours of 9/11. 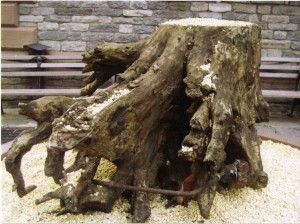 Fast forward to 9/26/2010.  I am in NYC for a week for a wedding and to see if this will be my next home.  On previous visits to NYC, I didn’t have a chance to be a tourist.  For this visit, I made a point of being a tourist.  My last tourist activity before the weekend wedding festivities was visiting Ground Zero.  I was reluctant, but I had an informational interview downtown so there was no excuse.  When I visit Europe, I usually go to churches and other war memorial sites.  I often wondered how the people who lived there survived and managed to rebuild in spite of such  horrific circumstances.  That was my feeling at Ground Zero.  A rush of emotions overwhelmed me at St. Paul’s Chapel upon seeing the remains of a tree stump that prevented the church from being destroyed.  That church was around before we became a nation and George Washington worshipped there.  (The tree stump has since been moved and relocated to Trinity Place Church).  Typically, I hide my emotions and reserve them for the privacy of my home.  Even at my father’s funeral, I was stoic and did not shed a tear until I was home and wailed within the safety of its four walls.  As I entered St. Paul’s Chapel, tears ran down my face uncontrollably upon seeing firefighter uniforms and pews still smoke and soot covered.  It is said that St. Paul’s was where first responders and people looking for loved ones took refuge.  The church’s white pews are now forever grey from all the dirt and dust.  Then there was the teddy bear memorial for children lost in 9/11 – too much.  That was when I begin to understand the gravity of what happened on that day in NYC.  I was humbled because my experience of 9/11 in Chicago seemed very sanitized compared to what actually happened and the remains that I viewed.  Where do you run in a cloud of black smoke?  What about the many tourists who happened to be in the area that unfamiliar with the city? Did they run directly in harm’s way? Are the subways safe?  Are the bridges okay to cross or are they too targeted? No cell service.  Is this truly the end? 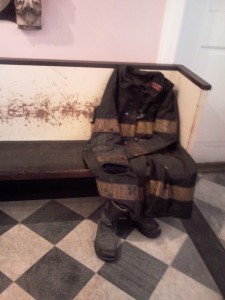 I was also angered at how politicians politicized Ground Zero for political gains and dividing the country over who were “real” Americans.  Real America is exemplified in NYC – diverse in race, ethnicity, cultures and religion! NYC is as close to the American melting pot as it gets.  Real Americans (Muslim, Christians, Atheists) woke up in NYC went to work at the World Trade Center and never returned home to their families.  Regardless of their faiths, they were all Americans and were killed by maniacal fanatics no different than the Oslo killer or McVeigh.  I can’t mention 9/11 around my roommate.  He immediately leaves the room.  Everyone in NYC knows someone lost on that day.  My friend’s sister came down with a rare cancer a couple years ago, thought to be related to the fumes she inhaled escaping the Towers.

I live in NYC now and walk past Ground Zero regularly.  I am amazed at how many American tourists come to Ground Zero and say it wasn’t what they expected.  It’s not fricking Disneyland!  It represents one of the worst tragedies in American history.  Until you see the remains of the devastation, it is hard to really understand what New Yorkers experienced on that day.  To help you get a visual, I recommend Joel Meyerowitz’s “Aftermath.”  I also recommend watching NBC’s “Children of 9/11.”  Lastly, I recommend watching Soledad O’Brien’s special on the Women of 9/11.

To New Yorkers, you inspire me with your spirit.  Thank God you are the concrete jungle because only a city with the heart of a concrete jungle could survive 9/11.  NYC reminds me of the Spartans in the movie “300.”  Yes other Greek city-states came to fight along side the 300 Spartans.  However, it was Spartan on the frontline, holding it down.  The most famous line from “300” is when Gerard Butler’s character yells, “This is Sparta!”  It made me want to jump to arms too.  Likewise, this is New York and you better recognize!  Don’t mess with the concrete jungle.  They are made of struggle, angst, heartbreak and an arrogance that nothing and no one is better than NYC.  New Yorkers despite race are New Yorkers first.  Everything else is second.

To New York and its residents, I salute your resilience and resoluteness!