Like most New Yorkers, I did not take Sandy seriously.  Irene turned out to be a bust last year.  See my blog entry Levity: NY Woman’s Survival Guide to Hurricane Irene.
https://ronda-isms.com/uncategorized/levity-ny-womans-survival-guide-to-hurricane-irene/

I did not realize it was a big deal until Sunday morning.  I was listening to the radio at work and there was an announcement that the subway was closing at 7pm.  Now that is serious!  Mind you, my mom had been calling from Chicago bugging me the past seven days asking what I was doing about Sandy.  Sandy who?  My mom always calls if anything happens in New York or the east coast.  Most of the times, whatever is going on is no where near me, so I do what a dutiful grown daughter does: “Mom don’t worry I’m fine.”  Well at 10:45am I was not fine because I had done nothing for Sandy.  The subway closure was another bitter reminder that I did not live in my preferred neighborhood.  When Irene happened, I lived in midtown and could walk wherever I needed to go, so the subway closure was meaningless for me.  However, Sandy with her subway closure gave me three more reasons to not like my apartment: (1) not walking distance to anything; (2) I found out my apartment is in Zone B since I am a block and a half from the Hudson River; and (3) stuck in my shoebox apartment working from home listening to my upstairs neighbors yell at each other.  They aren’t fighting. No one told them as a child that there is a such thing as an indoor voice and outside voice.  They even yell at the dog, not menacing just the only way they know how to communicate.  Lucky me, I already listen to jazz or classical at night to drown them out so I can fall asleep, now I have 24 hr exposure to the loud mouths above.

Phone calls from friends and family made me decide not to stay at the office longer. I left work at 2pm Sunday and went about my usual hurricane preparations: Amy’s Bread – baguette, peasant roll, walnut raisin roll, ginger snaps, peanut cookie, delice cheese.  Next stop, Amish Market for spinach artichoke dip, grapes, apples, and wine.  The radio already mentioned that water was sold out.  Like Irene, I headed to the baby aisle in Duane Reade and picked up three gallons of nursery water. I stopped by my new place, Donna Bell’s Bake Shop for southern comfort – homemade biscuits. I still had my super cute Hunter boots from Irene and candles, so in my mind I’m ready for Sandy.  More upset and hoping that this is real because being stuck in my apartment for 2-3 days will not be enjoyable. 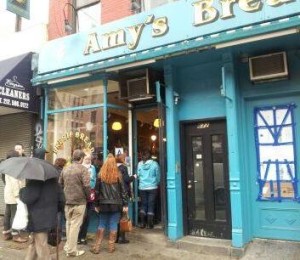 Monday morning I got on the computer and started working.  There was drizzle but no real wind.  I kept the television on NY1 to stay abreast of Sandy’s actions. The zone A areas are always subject to flooding, even during a regular storm, so it was anticipated. Being from Chicago, I have experienced some scary wind storms.  I expected Sandy to be worse.  It all depended on where you lived.  In my neighborhood, the winds picked up around 4pm Monday, but still not as bad as I experienced in Chicago.  The real rain didn’t hit my neighborhood until 4am this morning but only lasted for half an hour.  I basically slept through it all.  I was fortunate.

When I woke this morning, I had power, logged on the computer and began to work.  Checking in on friends told me how fortunate I was.  Most of them were without power.  However, they still have cell battery, but service is spotty.  If you have friends/family in the area, they are probably receiving your text messages intermittently depending on their cell provider.  Send them text messages with helpful information like alerts about water safety, evacuation safety centers – this can be found on their town/borough’s website. New York’s television Channel 1 has done an excellent keeping New Yorkers posted.  However, if they don’t live in the city (i.e. Long Island, NJ) then you need to check their city’s website.  Most mayors/governors are using twitter to keep constituents informed.  I have been monitoring Hoboken’s website/twitter to keep friends there informed because they are out of power.

The big damage was storm surge.  The salt water is slowing how quickly things can come back on line.  If you grew up in the 70s/80s, you may recall what happened if your car battery had corrosion at the connection points.  That is the situation here.  Even after the water is pumped away, the corrosive effect of the salt water has to be assessed before subways and power grids go online.  So in sending texts to your loved ones, send them helpful information about water, safety, where to go until their power comes up.

New York is strong. Neither hurricane, tornado nor earthquake can hold this city down. Events like this only expose how great a soul the city has.  Concrete jungle meant for survival. 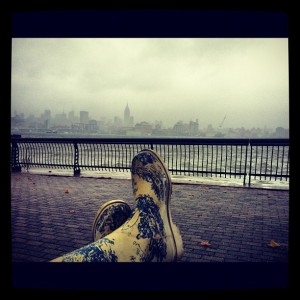