This was not suppose to be my original post to kick off the holiday season.  However, in writing that entry, it dawned on me that I should follow good counsel and exercise the goodness and kindness that I so admire about this time of the year. To understand where I am going, you need to understand where I am coming from.  For this readers, you must go down the rabbit hole.  Oh yes, the plot thickens.  The backstory is contained below in reposts.  Next week, I will come full circle.  I implore your patience as I explain the reason for the olive branch situation I am about to endeavor.

If you haven’t figured it out, I’m a huge Snoopy fan. I fell in love with Snoopy as a kid.  He’s one smart and cool dog.  A Charlie Brown Christmas is so necessary this time of the year.  Every year, after Thanksgiving, television airs all the Charlie Brown holiday sketches.  After Thanksgiving, I received a text from my niece, “auntie Charlie Brown is about to come on.”  I replied, “I know I love my Snoopy.”  Then it went downhill from there because my niece went to the forbidden topic.  She replied, “too bad about your Snoopy snow cone machine.”  Why open a wound that hasn’t healed?!  To understand the source of my open wound, read below.I know you all are thinking, “all of your childhood Christmases could not have been great.”  True, true – into every life a little rain must fall.  Imagine if you will, a bright eyed seven year old going through the Sears catalog.  Never before had she requested a specific gift from her parents – for she was too gracious for that sort of thing.  However, this year one item called to her and yearned to be hers.  The item of desire – a Snoopy Sno Cone Maker.  This young girl adored Snoopy, who couldn’t love Snoopy.  There would be no Charlie Brown without Snoopy.  Snoopy was cool. Even Lucy was jealous of Snoopy’s coolness.  That year, all she circled in the Sears toy catalogue was a Snoopy Sno Cone Maker.Christmas Day arrived and a box resembling the size of a Snoopy Sno Cone Maker lay in her section of gifts on the sofa.  Oh what joy, what disappointment!  It was not a Snoopy Sno Cone Maker but instead a Mr. Planter’s peanut butter maker.  What Grinch, Ebenezer Scrooge would do such a fiendish thing! Mr. Planter was no Snoopy.  He wasn’t even a cartoon.  He just danced around with a top hat talking about peanuts.  That year, a little girl’s heart received a dent that remained for years.  Why?  Why?  The next Christmas she hoped redemption would come and a Snoopy Sno Cone Maker would be hers, no such luck.  She despised the two feet Mr. Planter monstrosity! What type of forced child labor is this?  If I want a PB&J I have to make my own peanut butter.  She had to draw a line in the sand.  Instead of using it to make peanut butter, she used it to sharpen crayons.  Evil contraption haunted her sleep and put a dark cloud over Christmases to come.  So much so, that when she became an aunt, each Christmas she would tell the tale of no Snoopy Sno Cone Maker. 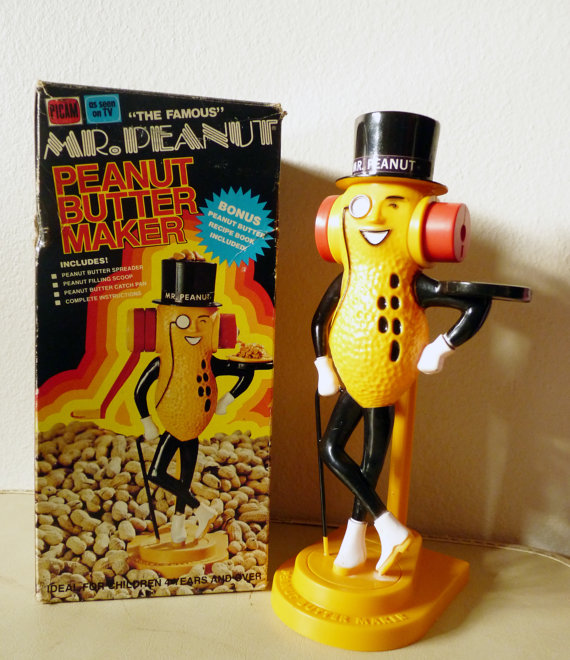 As an adult, she found the strength to confront her mother over the Mr. Planter incident.  Her mother put on a sincere face and said  that she could not find a Snoopy Sno Cone Maker.  It was sold out everywhere.  But why Mr. Planters?!  The mother said in a practical voice that only mothers use, “you were a picky eater and loved peanut butter and jelly sandwiches, so I thought it would be a good alternative.”  This answer did not lessen the blow to the daughter’s wounded heart.  The daughter said then why not the next Christmas?  The mother responded she didn’t think her daughter would want it then.

The daughter begin to wonder if what her older sibling said was true.  Was she adopted?  Everybody else received what they wanted for Christmas?  Was this yet another slight against the middle child?!  It was bad enough there were no baby pictures of me.  So the daughter, now aunt, relayed the story to her nieces and nephews, on how grateful they should be that they had an aunt that loved them enough to get them what they wanted.

If patience is a virtue, this daughter now aunt exercised it.   Twenty Christmases after requesting a Snoopy Sno Cone Maker, while repeating the tale to the nieces and nephews she noticed a box under the tree with her name.  Jokingly, she said, “the only thing that would make this perfect is if this is a Snoopy Sno Cone Maker.”   Wonder of wonders, miracle of miracles!  On my 27th Christmas, my younger sister found an old school Snoopy Sno Cone Maker.  What joy!  Finally.  Excited the aunt took her nieces and nephews to the kitchen to show off the long waited for sno cone maker.  It took about 10 minutes to make a sno cone, so one by one the nieces and nephews left the kitchen – they couldn’t wait that long.  I can’t recall what else I received that Christmas, but I know it was a good one.

But wait, don’t cheer.  Tragedy stuck in the form of an evil older sibling.  A couple of years after finally receiving my Snoopy Sno Cone Maker, my niece called.  “Auntie, I have bad news for you. Mommy threw out your Snoopy Sno Cone Maker.”  NOOOOO!!!!  During law school I moved around so I left Snoopy at home.  My niece, sensing her aunt’s anxiety offered “you can play with my Spongebob Snow Cone Maker.”  Blasphemy.  Her aunt protested, “Spongebob is no Snoopy!”  My niece, “auntie you just have to get over this because Snoopy is gone.” (hold back tears as I write this traumatic moment)

My sister did this because she knew I loved Snoopy – accident my foot.  She was just jealous that her favorite cartoon character didn’t have a toy – Bugs Bunny was smug just like her.  If we were still kids, I would have told on her.  Instead, I did the mature adult thing.  Since then, each Christmas I get her kids a loud noise making gift, with extra batteries.  My revenge for the death and loss of Snoopy. I heard the karaoke machine caused her much discomfort last year.  Muuuuahh!!

Now we go full circle to my niece’s email after Thanksgiving to me.  I asked her, “why mention my beloved Snoopy when I haven’t yet forgiven your mom?”  My niece replied, “auntie it is time for the healing to begin.”  My sister has made gestures of forgiveness like a stuffed snoopy, but it is still no Snoopy Snow Cone Machine.”  Hopefully, next year the wound can begin to heal.  Snoopy I miss you.

Every Sunday afternoon, I call home to check in with family.  They are usually in the car from church and my mom passes the cell around to my babies so I can talk to them. Today I called to check on a sick nephew and a niece that attended a high school winter dance.  As I asked my mom about my babies, my sinister older sister chimed in the background “I read your blog and you need to get over yourself telling the whole world.”  Oh no she didn’t!  Just as I was trying to heal and forgive her, she went there.  My mom is utterly confused because she doesn’t surf the internet.  I send her hard copies of my blog and forgot to send my holiday musings.My mom asks what is going on.  I told her “it’s Snoopy, she knows what she did.”  At that moment, my sister and I reverted to 7 and 8 year olds through a cell phone with my mom refereeing.  I repeated, “She did it to Snoopy on purpose.”  My mom asks my sister, “Did you throw away her Snoopy?”  My older sister replied, “It was an accident, we were moving and anyway I bought it for her and it was years ago anyway.”  Lies and she has incriminated herself.  She didn’t buy it for me, my younger sister special ordered it for me through a catalog.  My mom asks my sister, “Why would you throw it away?  You know how much she wanted that and it was a collector’s item.  Who throws away a collector’s item?”

Then my sister’s older daughter is heard in the background, “mom you threw away Auntie’s Snoopy? It was the best snow cone maker.  Everybody knows how much auntie loves Snoopy.”  Still, my sister’s heart was as hardened as the Scrooge.  She was not apologetic and blasphemous in her contention that she bought me my beloved Snoopy Snow Cone Maker.  Then my sister goes for the kill, “she’s crazy for proclaiming it to the world in her blog.  She should get over herself.”  My mom, the referee, “that wasn’t right to throw it away.”Mom said that they arrived home and would call me later.  I told mom to tell my niece to pray for her mother’s Scrooge heart.  I was trying to heal, but she re-opened my wound.  I spoke with my niece (mini-me) that told me to heal.  I told her to tell her mom that there will be no mention of my Snoopy during my holiday visit.  It was not right and she knew it caused me pain.  My 14 yr old niece sounded irritated at being in the middle of her aunt and mother squabbling like toddlers.  I told her it was no different than when her sisters take her stuff without asking.  Just please when I come home for Christmas, don’t let her mom mention my Snoopy.  My niece spoke like a therapist trying to calm an excited patient, “auntie it will be okay.”

I will celebrate with my nieces and nephews (cookie baking, sledding, Auntie Ronda’s Snack Mix), but if my sister crosses the forbidden zone – I am not going to share my cookies with her or the Auntie Ronda’s Snack Mix and she loves that!  I haven’t shared that recipe with her.  So for her stomach’s sake, she’d better keep my Snoopy off her lips!!!!!!!!!

For what happened Christmas 2011, tune in to next week’s post….