Fast forward to Christmas 2011.  Christmas Eve with Auntie is a tradition.  When I announced that I was moving to NY in 2011, the first thing the nieces/nephews asked was “what about Christmas Eve?”  Traditions are to be honored.  I could not make it home early enough to prepare my traditional formal sit down lunch.  Instead, I did a brunch for Christmas Eve 2011.  The number of guests steadily increased when my nephews became teenagers.  Now they are grown and invited college and military friends.  I had a cheese plate (brie, gouda, Wisconsin white cheddar, gruyere, parmesan reggiano, and goat cheese with hot pepper flakes), flat bread, tuscan bread with olive oil and pepper and prosciutto.  I had a fruit tray of berries and grapes.  I make an autumn apple salad – my take on the Publican’s version.  Lastly, we had eggs, grits, fried chicken, and the all important Auntie Ronda’s Snack Mix. This is not the holiday mix on the side of the cereal boxes.  I received this recipe from a law school friend’s granny because I kept bugging her to make more.  It is something that I am always expected to bring at holiday parties or ship around the country wherever my babies may be.

It is noon Christmas Eve 2011.  Nieces, nephews, family, friends are gathered.  I recall there was not a crumb left and I did not get a morsel.  However, there were tons of smiling munching faces – the kind that you only see this time of year or rare occasions.  It started to get rowdy when it was time to open gifts.    Last year, we had a spelling contest (to encourage those taking entrance exams but all ages participated).  Christmas spending money was the available for each word spelled correctly.  After the spelling bee, we opened gifts starting with the youngest to oldest.

You’ll recall from last week’s post that I repay my sister during Christmas by giving my nieces/nephews loud gifts.  The karaoke machine in 2010 was the gift that kept giving because everyone that walked in her door wanted to sing – it was like the worst of American Idol.  That gift provided a year of consolation for me 🙂 I had not planned to get a loud gift for 2011 because I was trying to grow and heal.  There was nothing premediated about my gift to my dear four year old nephew.  It just happened that when I asked him what he wanted for Christmas, he said a karate kid outfit, a trumpet and a guitar.  Well, auntie tries her best to fulfill her babies wishes.  The trumpet was out of the question.  However, I did go to Chinatown in NYC to get my baby an outfit like Wong Fei-hong in Iron Monkey (I’m an old school martial arts junky). 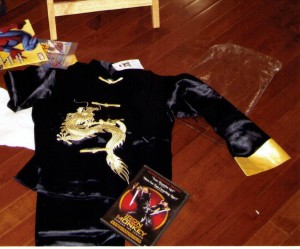 Originally, I planned to get him a toy guitar, that was until my sister re-opened my Snoopy wound during the phone conversation.  Then I thought about it.  I wanted to invest in my nephew’s musical interest and lo and behold a real guitar was the same price as a toy one.  Oh yes I did! I bought my baby an electric guitar that looked like BB King’s Lucille.  I didn’t stop there, oh no.  I bought him a plug in amp so he would not have to worry about batteries.  The day before I had one of the teens from the marching band tune it for me.  First, he opened his “karate kid” gift.  He immediately put it on and looked so handsome in his black silk outfit.  I told him that Iron Monkey was way better than Karate Kid and we could watch the dvd.  Then he opened the piece de resistance. His eyes were as big as saucers!  “I’m going to be a rock star?”  I looked at him and smiled, “Rock out baby!”

As he plugged his guitar in the amp, my sister looked at me.  I told her “that’s for Snoopy.”  She replied, “that’s why he had to go!”  Oh yes, she incriminated herself then and there.  I have witnesses.  Everyone started shaking their heads “not Snoopy again.”  I ran to my sister and removed the bowl of Auntie Ronda’s Snack Mix from her hands.  I warned her not to mention Snoopy or she’d forfeit her Auntie Ronda’s Snack Mix.  I had proof she maliciously with intent threw away my Snoopy Sno Cone Machine.  After confiscating her Auntie Ronda’s Snack Mix, I turned up the volume on the amp and told my nephew to give his concert.  I was vindicated.