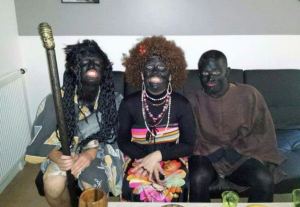 French police from a Paris suburb are under fire after putting boot polish on their faces instead of their shoes and feasting on bananas during a fancy dress party.

The cops thought it would remain private, but a picture of them with their grinning black faces and frizzy afro wigs appeared on a social media site where it quickly spread – and now they have been suspended.

One of the images shows a police officer with a bunch of bananas scratching himself as if he was a monkey, and with a bucket of nuts on the ground in front of him.

Officers from the Inspection Generale de la Police Nationale – the police department that investigates officer behaviour – are set to grill the black face gang from the Paris suburb of Kremlin-Bicetre this week. They could all be sacked – or fined for insulting behaviour.

“If the police officers who have the responsibility to fight against racism are more busy making fun of black people than defending them, it could explain why things have advanced so little in this domain,” said Louis-Georges Tin, president of black group Conseil Representatif des Associations Noires.

Tin has asked for a meeting with Frances top policeman, Interior Minister Bernard Cazeneuve. He added: “The black people of this country dont have to put up with racial profiling by people who dress up like this at night.”

The blacked up photo scandal comes after a string of high-profile racist taunts directed at Frances black Justice Minister Christiane Taubira. Far-right weekly magazine Minute published in November 2013 a cover page with the headline “Crafty as a monkey, Taubira gets her banana back”.