Three years ago, someone gifted me a copy of The Alchemist saying that it would change my life. I did not read it until this weekend. Five years ago, I embarked on my own Santiago-esque journey leaving Chicago and the law to pursue my dream and passion of writing. My initial impression of The Alchemist was shock that it was so widely accepted considering the religious symbolism of the good shepherd and Melchizedek – all references to Jesus Christ and his relationship with the church. The other thing that struck me about The Alchemist was how it highlights adversity and failure in the pursuit of one’s Personal Legend when modern society shuns failure. From infancy, we are molded into being the norm, trying to make our children mirror images of ourselves. We as a society do not value diversity of talents and pursuing Personal Legends.

I grew up fundamentalist, Pentecostal, evangelical which meant spending almost every day in church and no secular music or television aside from PBS. Thank God for PBS – it truly was my window to the world! Since most reading was shunned outside the Bible, I noticed a theme about the heroes/heroines of faith. Despite being “called” or prophesy of their greatness, they endured tremendous trials before greatness was achieved. Disappointment and grief seemed constant companions as they were beset by failure after failure in pursuit of the dream. The story of Joseph haunted me as a precautionary tale for dream chasers, get ready to endure years of punishment before realizing your dream.

Trial by fire (failure) seems to be a necessary element in the journey to growth and the maturity process of realizing one’s Personal Legend. Yet, western society frowns on failure. No great athlete, musician, artist, inventor, or leader ever made it but for a series of failures that became the catalyst for success. We tell the youth to be change agents, but we really don’t like change agents because it challenges the status quo and requires us to accept that there are different ways to learn. Our everyday sayings re-enforce an aversion for change. Don’t rock the boat. If it ain’t broke don’t fix it. We’ve always done things this way. Let’s go back to the good ole’ days when things were better. Make America great again. Things only become better when we accept like Santiago that “Everyone has his or her own way of learning things. His way isn’t the same as mine, nor mine as his. But we’re both in search of our Personal Legends, and I respect him for that.”

Change is scary because it is unknown. However, it is the only constant. We must continue to evolve as a society. Technology has made the world smaller and more interdependent. Therefore, seeking to return to isolationism is going backwards.  As the would-be alchemist learned, “I must have no fear of failure. It was my fear of failure that first kept me from attempting the Master Work.” The old alchemist told Santiago, “Everything in the universe evolved…Men have never understood the words of the wise. So gold, instead of being seen as a symbol of evolution, became the basis for conflict.” The Bible refers to wisdom and knowledge as more precious than gold and says that words of wisdom are better than weapons of war. Yet, we pursue war over wisdom.

I am sojourning on my own dream chasing journey. For every moment of success, it seems fraught with failure and disappointment. I constantly remind myself there is no success without the struggle. As the alchemist told Santiago, “There is only one way to learn. It’s through action. Everything you need to know you have learned through your journey. What went wrong when other alchemists tried to make gold and were unable…They were seeking the treasure of their Personal Legend, without wanting actually to live out the Personal Legend.” Not very confronting while things are seemingly in a downward spiral. But as my father always said, “You don’t want to get to the end of your life and wonder what would have happened if only you tried.”

So I continue to sojourn fearful that my heart might be traitorous. I remind myself, “Naturally it’s afraid that in pursuing your dream you might lose everything you’ve won. People are afraid to pursue their most important dreams, because they feel that they don’t deserve them or that they’ll be unable to achieve them. Tell your heart that the fear of suffering is worse than the suffering itself.” So I struggle to follow my heart and listen to my soul. My motto for Ronda-isms is “Failure is an option and it’s okay, just keep trying.”

The Alchemist sums up the joy and pain of the dream chaser. “Before a dream is realized, the Soul of the World tests everything that was learned along the way. It does this not because it is evil, but so that we can, in addition to realizing our dreams, master the lessons we’ve learned as we’ve moved toward that dream. That’s the point at which most people give up. Every search begins with beginner’s luck. And every search ends with the victor’s being severely tested.”

Paulo Coehlo said it best. “We don’t all have the courage to confront our own dream. There are four obstacles. First: we are told from childhood onward that everything we want to do is impossible. We are then faced by the second obstacle: love, afraid of hurting those around us by abandoning everything in order to pursue our dream. The third obstacle: fear of the defeats we will meet on the path. We who fight for our dream suffer far more when it doesn’t work out, because we cannot fall back on the old excuse: ‘Oh well, I didn’t really want it anyway.’ We warriors of light must be prepared to have patience in difficult times and to know that the Universe is conspiring in our favor, even though we may not understand how. The secret of life is to fall seven times and to get up eight times. Then comes the fourth obstacle: the fear of realizing the dream for which we fought all our lives. But if you believe yourself worthy of the thing you fought so hard to get, then you become an instrument of God, you help the Soul of the World, and you understand why you are here.”

This was a featured post on HuffPost GPS for the Soul 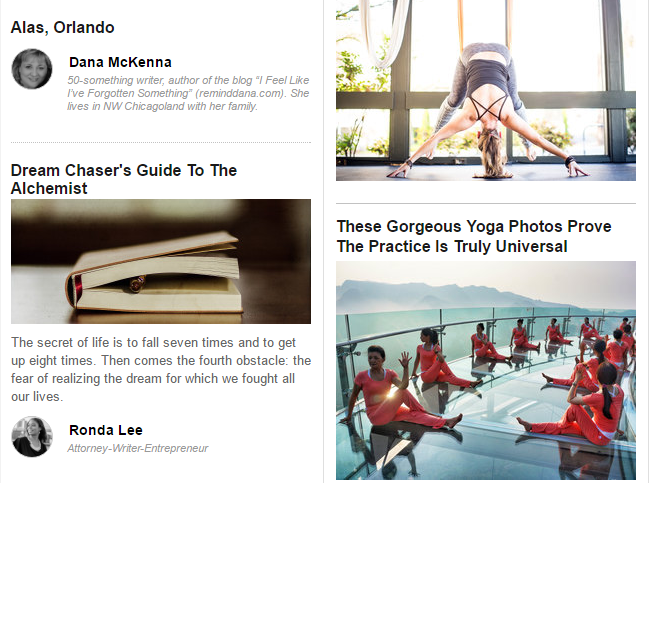