2019 Update: Republican Congressman Steve King said, “White nationalist, white supremacist, western civilization – how did that language become offensive?” A few days later other Republicans spoke out. However, for years King had been known to use racist language. The new face of the Republican party includes a brothel pimp (Dennis Hof) and a Nazi (Arthur Jones), inspired by Donald Trump. “Make America Great Again” or Trumpism has become code for racists, homophobia, and xenophobes to come out of the woodwork and corrode everything the Constitution stands for. It started with the Muslim ban. Trump’s latest immigration purge is reminiscent of racial cleansing with its focus solely on Mexican and south of the border immigrants even though a good percentage of unauthorized immigrants come from Asia, Europe and Canada who overstay their visas.  As Trump urges his base to forego due process under the law, an essential component to American government of checks and balances, we enter a scary stage of American politics worse than McCarthyism because Trump stands unopposed. Unlike the Nixon Republicans, no one in the Republican party has stood up for reason decrying the abuse of power and violation of Constitution the Trump administration perpetuates.

On MLK’s holiday I post the same article, In Spite of Dr. King’s Dream, We Have Not Reached the Mountaintop. Trump’s presidency is a prescient reminder that today is a cause not for celebration, but for mourning. This year bears more weight because it marks the 50th year of Dr. King’s assassination and it seems that we have chipped away at Dr. King’s efforts to get a foothold on the dream. I had a chance to visit the Lorraine Motel in Memphis, which is now the National Civil Rights Museum. It is a must see for anyone visiting Memphis.

My visit to the museum was melancholy. I want to believe that in the end good triumphs over evil and that mankind loves humanity. However, movies and monuments about the Holocaust, slavery, and Jim Crow devastate my mind at the total lack of humanity towards a fellow brother. Yet, it is my history – American history that we have not yet come to grips with. Just recently, people questioned the big deal of the H&M black boy wearing a monkey hoodie. If you knew history, instead of asking what’s the big deal, you too would be equally outraged.

Throughout Europe, there are many monuments and museums that chronicle our inhumanity towards each other through wars where a race, ethnicity, or group of people are paraded about as the ill of society and the only way to cure that ill is via wiping them from the face of the earth aka genocide. America’s Civil War was a race war. “We hold these truths to be self-evident: that all men are created equal; that they are endowed by their Creator with certain unalienable rights; that among these are life, liberty, and the pursuit of happiness.” However, southern states’ economy was built on slavery and did not espouse those values. To fully embrace that concept would mean that the institution of slavery was against the foundation of American democracy. Post-Civil War, we entered Reconstruction, Jim Crow, and Civil Rights still trying to hold these truths to be self-evident. 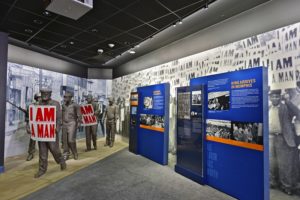 Enter the Sanitation Workers strike of Memphis in 1968 where black city workers were simply trying to attain life, liberty, and the pursuit of happiness like other Americans. A bit of history. The Lorraine Motel was bought by a black couple in 1945 and named after Nat King Cole’s song Sweet Lorraine. The couple opened the motel so that blacks traveling south could have safe accommodations. Memphis’ Beale Street was black owned. At the time of the strike, the city of Memphis had over 1,300 sanitation workers and only one was white. Although black sanitation workers paid union dues they were not entitled to sick pay, breaks, not paid for rain days, and required to work overtime but did not receive overtime pay.

The sanitation workers organized at the AME church to march twice daily from the church to city hall. At the AME church, the iconic I Am a Man signs by Ernest Withers were distributed. The wives and children of the workers would wait at the church while the men marched. Dr. King first arrived to bring attention to the sanitation workers on March 28, 1968. On that visit, violence ensued at the march when someone threw a rock through a window on Main Street. Some say it was an underground militant group and others say that police broke the glass. Police brutality ensued. Some thought it was an assassination attempt on Dr. King who was removed from the march. Police followed marchers back to the AME church. A standoff occurred and the police shot tear gas into the sanctuary of AME where the women and children were sitting in pews. A young black teenager, Larry Payne, was killed during the police brutality. Undeterred, Dr. King promised Pastor James Lawson that he would return to support the workers. A couple of weeks later, Dr. King returned. He gave his “Mountain Top” and was later assassinated. 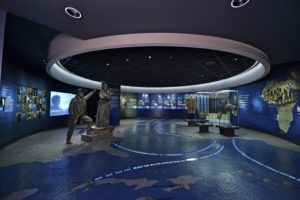 As I entered the National Civil Rights Museum, I did so with trepidation. You enter starting with the slave trade, ships, slave routes. For the first time, I lingered. My African ancestry had been a mystery to me. Recently, I completed Ancestry’s DNA kit. I found out that I was 28% Cameroon/Congo, 25% Ivory Coast/Ghana, and 16% Benin/Togo. I read in reverence to the journey of the Middle passage and what my ancestors had to endure.

From there the museum meanders through history with artifacts and interactive exhibits. Upon seeing the Montgomery bus exhibit, I approached silently. I entered from the rear of the bus. As I walked to the front of the bus, I jolted as I heard “Hey gal, go to the rear. If you don’t I’ll call the police.” As my eyes welled up, I immediately got off the bus. I was only half way through the tour and this was too much. The luncheon counter exhibit was likewise painful. When I reached the exhibit about the Birmingham children marchers, I could not. How I had I forgotten this? The only reason the White House intervened was because of this incident. After many black men and women were water hosed and had dogs attack them, some thought a peaceful march by children would prevent police brutality. The police water hosed and set dogs on young children. The Birmingham police arrested over 2,500 young black children marching so much that teachers noted that the schools were virtually empty because all the children had been arrested. 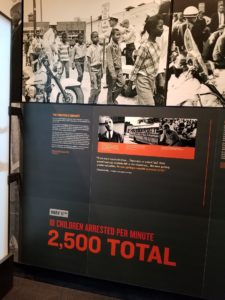 I quickly walked through the rest of the tour because emotions of pain, anger, and contempt for apathetic people who “don’t get or understand what the problem is” reached a boiling point. The tour ends with a viewing of Room 306 and 307. It is a solemn experience. Black Lives Matter exist today because violence perpetuated against black men, women, and children has not changed. My heart ached as the words of James Weldon Johnson came to mind. “We have come over a way that with tears have been watered, we have come treading our path through the blood of slaughtered.”

To commemorate the 50th anniversary of Dr. King’s assassination, the National Civil Rights Museum and the city of Memphis have yearlong programing named MLK50. Honor the legacy of Dr. King by visiting the museum and taking part in local events and programming.

For those who still do not understand, I leave you with the words of Dr. King, enlightening in these days of Trump.

I must make two honest confessions to you, my Christian and Jewish brothers. First, I must confess that over the past few years I have been gravely disappointed with the white moderate. I have almost reached the regrettable conclusion that the Negro’s great stumbling block in his stride toward freedom is not the Ku Klux Klanner, but the white moderate, who is more devoted to “order” than to justice; who prefers a negative peace which is the absence of tension to a positive peace which is the presence of justice; who constantly says: “I agree with you in the goal you seek, but I cannot agree with your methods of direct action”; who paternalistically believes he can set the timetable for another man’s freedom; who lives by a mythical concept of time and who constantly advises the Negro to wait for a “more convenient season.” Shallow understanding from people of good will is more frustrating than absolute misunderstanding from people of ill will. Lukewarm acceptance is much more bewildering than outright rejection.

I have just received a letter from a white brother in Texas. He writes: “All Christians know that the colored people will receive equal rights eventually, but it is possible that you are in too great a religious hurry. It has taken Christianity almost two thousand years to accomplish what it has. The teachings of Christ take time to come to earth.” More and more I feel that the people of ill will have used time much more effectively than have the people of good will.

We will have to repent in this generation not merely for the hateful words and actions of the bad people but for the appalling silence of the good people. Human progress never rolls in on wheels of inevitability; it comes through the tireless efforts of men willing to be co workers with God, and without this hard work, time itself becomes an ally of the forces of social stagnation. We must use time creatively, in the knowledge that the time is always ripe to do right. Now is the time to lift our national policy from the quicksand of racial injustice to the solid rock of human dignity.

I must honestly reiterate that I have been disappointed with the church. I do not say this as one of those negative critics who can always find something wrong with the church. I say this as a minister of the gospel, who loves the church; who was nurtured in its bosom; who has been sustained by its spiritual blessings and who will remain true to it as long as the cord of life shall lengthen. — MLK