2019 Update: In his address to the United Nations, Trump pushed nationalist rhetoric.

I have compared Trumpism to McCarthyism. However, I fear it may be worse because at least politicians like Republican Senator Margaret Chase-Smith spoke against McCarthyism in her speech Declaration of Conscience. Trumpism is unopposed from his party. Trump has attacked almost every marginalized group in America. Republicans, formerly hailing themselves as the party of family and moral values, support Trump’s policies and hateful rhetoric. Conservative Christians claim that Trump is finally upholding conservative values.

It is no wonder that the founder of the Protestant Reformation, Martin Luther said that “ignorance and suppression of liberty very many blind pastors take pains to encourage.” Dr. Martin Luther King Jr. while imprisoned in a Birmingham jail wrote, “I must honestly reiterate that I have been disappointed with the church… We will have to repent in this generation not merely for the hateful words and actions of the bad people but for the appalling silence of the good people.” Many wars happened as religious leaders sat silent or apathetic to the suffering of others. During World War II, Lutheran minister Martin Niemöller was an early Nazi supporter. He later opposed Hitler and is known for First They Came for the Socialists.

First they came for the Socialists, and I did not speak out—
Because I was not a Socialist.

Then they came for the Jews, and I did not speak out—
Because I was not a Jew.

Then they came for me—and there was no one left to speak for me.

Hitler started with political opponents, Jews, and euthanasia killings of the physically disabled and mentally ill. Anyone that was considered “other” or opposed his policies was a target of imprisonment or death. As a child in school, I always wondered how could so many Germans be deceived or support Hitler? History showed us the devastation of modern technology during World War I (WWI). Due to sanctions and reparations for its role in WWI, Germany suffered economic and political instability. Instead of acknowledging that as the root of its problem, as is human nature, it blamed someone else as the cause of the problem. If only you could get rid of “them” then all would be well. Stefan Kanfer explained that Hitler “concentrated on an inflammatory speaking style flashing with dramatic gestures and catch phrases:”Germany, awake!”

Fast forward to 2016. Enter Donald Trump self-proclaimed “art of the deal” businessman. His catch phrase: Make America Great Again! Trump’s campaign rhetoric was filled with xenophobia, racism, sexism, and homophobia. Trump bragged that he could shoot someone on Fifth Avenue and not lose supporters. Trump encouraged violence on his campaign telling supporters to knock the crap of protesters and he would cover legal fees. Republican, Greg Gianforte, assaulted a reporter for asking a question and Trump praised him. Violence against people of color, harassment of women, and immigrants under Trump’s tenure is like Hitler’s rise and McCarthyism. Teachers are threatening to report students to ICE. Still, evangelical support of Trump has not wavered.

“Make America Great Again” or Trumpism has become code for racists and xenophobes to come out of the woodwork. Trump’s latest immigration purge is reminiscent of racial cleansing with its focus mainly on Mexican and south of the border immigrants even though a good percentage of unauthorized immigrants come from Asia, Europe, and Canada. Trump’s travel ban focused on visitors from Muslim countries. His rally cry against immigration focused on brown and black people of African or Hispanic ancestry. At a rally, Trump asked if there were any Hispanics in the audience before demanding his border wall.

Immigrant children are being separated from their parents and locked in cages. Jeff Sessions mocked separated immigrant families. Blacks and Mexicans are being accosted on the street by Trump lovers calling them rapists or threatened to call 911 because they do not believe they belong. People called the cops on a black firefighter and politician because they looked suspicious. Trump viciously attacks black athletes protesting police brutality calling them “son of b*tch” and unpatriotic, but defended white supremacists attacking people in Charlottesville. Like Hitler, anyone who opposes Trump, especially if they are a person of color, is attacked and often referred to as having “low-IQ.” Unlike Hitler, Trump has the benefit of artificial intelligence to help spread his hate campaign through what some are calling scientific racism.

Trump supporters have called for violence against teenage survivors of mass school shootings because survivors march for gun control. Trump supporters and pundits even  called some victims crisis actors. Hitler killed the disabled. Trump and his supporters make fun of the disabled – womp womp. A brothel pimp, pedophile, and Nazi run for office on the Republican ticket, inspired by the rise of  Donald Trump.

In response to McCarthyism, Albert Einstein said, “God’s own country becomes stranger and stranger, but somehow they manage to return to normality. Everything  – even lunacy – is mass produced here. But everything goes out of fashion quickly.” I fear the damage of Trumpism and that a return to normality is not possible. We do not have the luxury to remain silent when Trump’s policies and rhetoric cause hate and real harm. We are at a critical juncture in American history. Millennials, you must vote in the same force that you protest because your voice can disrupt the political landscape. Follow Alexandria Ocasio-Cortez’s lead. In the words of Bob Marley, “Get up, stand up for your rights! Don’t give up the fight!”

Trumpism: First They Came for by Ronda Lee

First they came for Black Lives Matter and those kneeling to protest police brutality, and I did not speak out—
Because All Lives Matter.

Then they came for Muslims, and I did not speak out—
Because I am not a terrorist like Timothy McVeigh, Eric Fein, Dylann Roof, and James Holmes.

Then they came for Mexicans and immigrants, and I did not speak out—
Because I am not an immigrant even though my ancestors were.

Then they came for me—but they won’t because I am not like those “other” people. I Make America Great Again by calling 911 anytime I feel someone doesn’t belong! 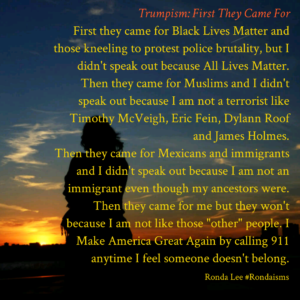