If you seek the traditional black history story, you can read my article on Why America Needs Black History Month and America Lift Every Voice and Sing. This year for Black History Month, I am doing something different. Inspired by the Honorable Maxine Waters’ “reclaiming my time,” I want to change the narrative. During the holiday season, did you notice the commercials featuring the “traditional” white family, Hispanic family, and Asian family? However, when it came to black family portrayals, there were little to no portrayals of a black husband and black wife. Almost every portrayal of the “black family” was an interracial couple. Why is it preferred to show the “black family” as only interracial instead of the traditional black family? Studies show that “Asian and Hispanic newlyweds are the most likely to be intermarried… Only 24% of recently married black men were intermarried, compared with 12% of newly married black women.” Yet, if you watch commercials, the black family is dead. There are sitcoms for every type of white family – working class, blue collar, middle class, wealthy, anarchist, drug addicted, LGBTQ and military. Even among the bad prototypes of white family sitcoms, there exists a family structure. Not so when it comes to the portrayal of black families. For this reason, I am Reclaiming the Black Family.

My parents met at the age of 11 and 12 on the playground. They were sweethearts and married out of high school. Most of my aunts and uncles were married. Most of my parents’ friends were married. Even for the single parents, the fathers were involved with their children. When my parents had house parties, there were always black couples dancing like a scene out of Claudine or Uptown Saturday Night. I grew up seeing black men respect, protect, and brag about their women. New Year’s Eve, I would hide and stay up past my bed time to spy on the adults. Nearing midnight, all the men would talk about how they had to leave to ring in the New Year proper with their wives. I grew up poor and working class, yet these were prevalent images of the black family in my childhood.

There are many black families headed by single women, but extended family members step in to fill the void. We have always believed that it takes a village to raise a child. Black love exists despite the incessant portrayal of the black family as fractured. Allow me to introduce the modern millennial black family, the Brooklyn Ellises: Devale and Khadeen. You probably already know them through their Instagram page @IamDevale, @Khadeeniam, or their YouTube channel, The Ellises. They have also been featured on BET’s Black Love Series. Devale and Khadeen Ellis are young black professionals building a legacy for their children. I recently spoke with Devale and Khadeen on how they make their marriage work. 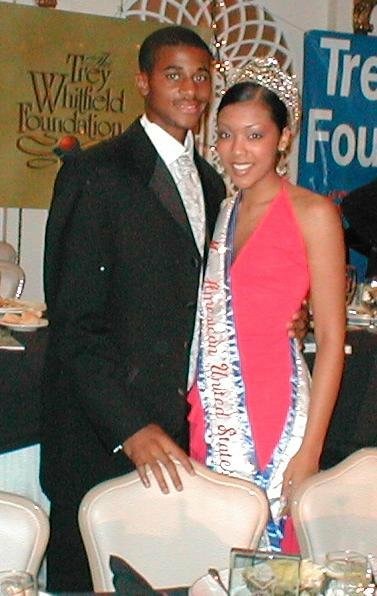 How did you meet?

Devale (Devale Ellis): Since elementary school. We have brothers and sisters around the same age that knew each other. We’ve been crossing paths throughout life. She was a freshman and I was a senior in college and she was hosting a pageant event. She was traveling because of the pageant, so she had to chase me.

Khadeen (Khadeen Ellis): No Devale, get it right.  He was chasing me. He thought I was playing hard to get, but I had just won Miss New York and had a hectic pageant schedule. At the time I was considering transferring to Hofstra where he was attending. I decided to reach out to him, but I forgot his number.  I drove by his house and didn’t see his car. I finally called the house and spoke to his mom and she gave me his phone number. We met at the event. I eventually ended up transferring to Hofstra.

Most people do not know that you’re not simply Instagram famous. You both have degrees and background in Broadcast Journalism and Business. Devale you have acting credits and were in the NFL.

Devale: I played sports to alleviate the financial burden of college. I played basketball in high school, but I was not six feet tall. I realized that you did not have to be LeBron James to get your college education paid. I switched to football and ended up playing football at Hofstra. I was in the NFL for four years. My goal was to make the money and set myself up so that I could have the financial means to be independent once I left the league.

Khadeen: I began pageants at the age of 10. I expressed an interest in television and my mom thought doing pageants would be great exposure and help with public speaking and interviewing skills. I was Miss New York Pre-Teen and Miss New York Senior Teen. I competed until I was 19 when I was Miss New York Teen US and won the national title in 2001-2002. Doing pageants was how I started doing makeup. After leaving the pageant scene, I did make-up for MAC, then freelanced. 80% of my work as a makeup artist is for weddings. After college, I worked as an on-air personality for a New York based online celebrity news site, Hot Zone, that covered red carpet events. It helped build my reel and resume in the industry. 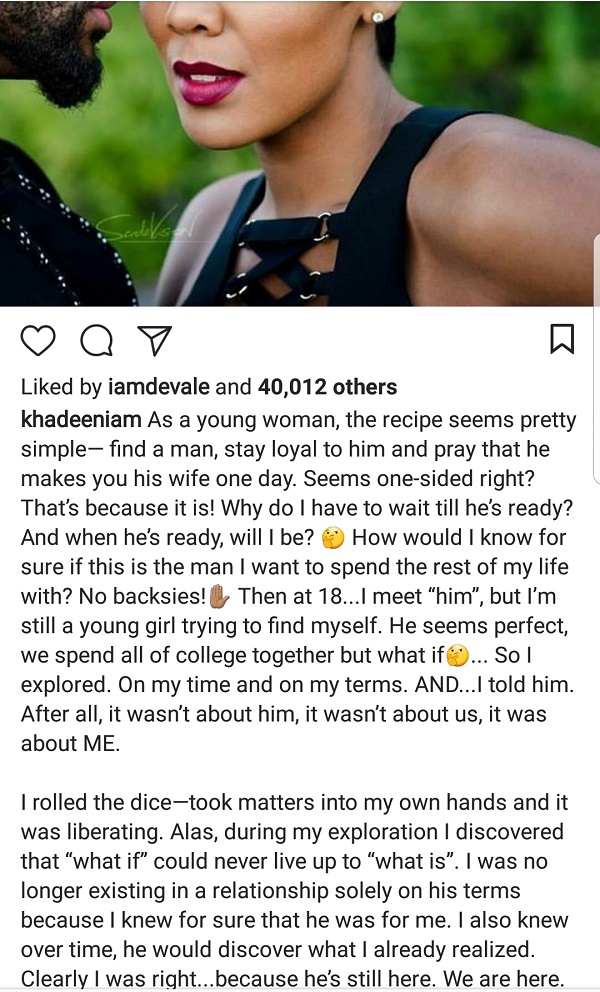 You guys are rather young and have a young family. Was that by design?

Devale: We spoke about it early on. We are about legacy building. We didn’t want to wait long to start a family. We wanted to enjoy our children while we were younger. The NFL was extra. We decided to use that to save money to start our own business, so that we could have income while chasing our artform.  We used the NFL money to invest and build other businesses. If you don’t have collateral, then when it comes to showbiz you have to take whatever role they offer you – inmate, criminal, thug, or vixen.  That’s why we went the social media route to create content that was true to our narrative and put positive images of the black family out there. When it comes to our social media, Khadeen produces and I am the actor.

Khadeen: Both our parents were old school. My parents immigrated from the Caribbean. They were humble hard workers. We wanted to raise our kids with little reliance on daycare. We have family support and flexibility to raise our kids while pursuing our craft and being actively involved with our kids.

How did you know the mechanics behind legacy and wealth building?

Devale: My parents were traditional. Work hard, study hard, get a good education and find a stable job with good benefits and a pension. When I went to the NFL, I was not trying to be Hall of Fame. I wanted access to the 1% to find out how they built their wealth as a lawyer and executive without being an athlete. I noticed the executives keep wealth in the family. I sat back and was very quiet, then I asked questions about how did you start your company? Building a business is hard work. You may not reap the benefits, but your kids will. You build the business for the kids to take over. Use the building time to teach your children. Instead of drinking the Kool-aid about going into debt to go to college, teach them to be entrepreneurs. I wanted to be a “nation builder” and pay it forward within our community as well. In addition to starting our own businesses, my brother and I started a mentorship program, Prototype Mentorship Experience, for young black males to get them into education positions. Representation matters. Black boys perform better with black male teachers.

Khadeen: I learned from Devale. His father laid down a foundation for him. But Devale’s business background and observing how people who wrote the checks for the athletes made their wealth was an education for me. 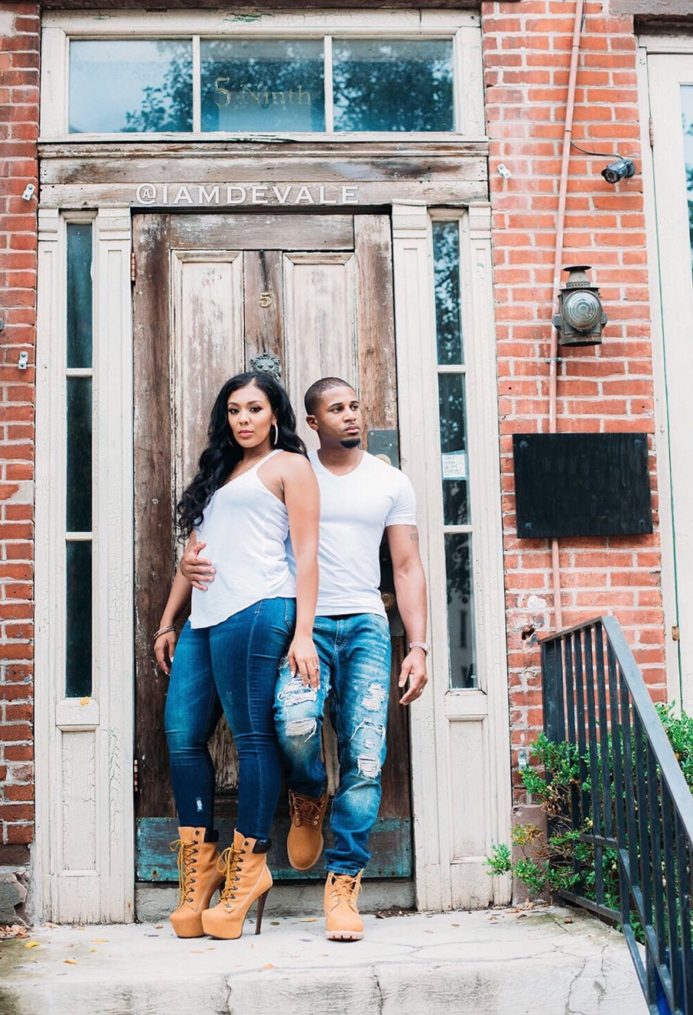 As a lawyer, I know that marriage is a contract and partnership. No one goes into  business without clearly outlining risks, duties, and what each party will bring to the business. Yet, people do it all the time with marriage.

Devale: For me, not wanting to be a liar is key and I need to live my truth. I met Khadeen when she was 18 years old. We started out as friends. We were always honest about what we wanted before we were in a relationship. We were honest about needing a break and how we felt. I didn’t want to be deceitful and dishonest. Did it hurt when she wanted a break? Yeah, but when we chose to be with each other in the end we could because we chose each other. Not out of obligation.

Khadeen: I met Devale when I was 18 years old and came from a very strict household. I couldn’t date. At 18 how do I know if I met the person that I want to spend the rest of my life with? I met him getting my first taste of freedom in college. I had to figure out what made me happy. Yes, you can grow together, but you also have to grow as an individual. You must find your happiness as an individual first.

You two seem to have written your rules. You are very honest about having options, exploring those options, and then choosing to be with each other and making the marriage work.

Devale: People are too busy drinking the Kool-aid of what a relationship and marriage should look like. How do I know that will work for me? Monogamy is hard. We are not relationship experts. You have to be honest with your significant other. Also, you have to remember that social media is just a snippet of our lives. 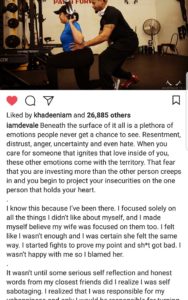 You guys are very open on social media. Does it worry you that your children are out there?

Devale: You can’t be fearful or afraid to share. It is technology that is part of our life and an opportunity to build. We have conversations with kids before we post. We’re trying to create a legacy. Any money our kids earn through acting goes into an account for them.

Khadeen: We decide what the narrative of our kids will be, which is why we do not have agents for the kids. We are their agents. We keep them under our umbrella. Plus, you need to know how to use social media. I am the one that says no posting location in real time or things that include our location like street signs. People do recognize us when we’re out and feel a familiarity to us. We talk to Jackson’s teacher. He does not attend class trips if we aren’t with him.

Devale and Khadeen are but one example of the modern black millennial family invested in not only building a legacy for their children but the community. The black family is alive and well. Working class, middle class, or upper class – the black family is doing what it has always done taking care of the larger family, being the shoulders that the next generation can stand on. As Gladys Knight sang, the black family is still “huggin’ and lovin’…getting with the kissing…sticking like glue still loving you.”

This Black History Month, I salute the black family and black love. In the words of Al Green, “Let’s stay together…loving you whether times are good and bad happy and sad.” For my couples, groove out to husband and wife duo Kindred Family Soul’s Stars and celebrate the strength of the ties that bind.