“We hold these truths to be self-evident, that all men are created equal, that they are endowed by their creator with certain unalienable rights, that among these are life, liberty and the pursuit of happiness.” – US Declaration of Independence

Unfortunately, America does not seem to believe all men are created equal as evidenced by its treatment of blacks in this country. African Americans have fought on behalf of America in every war (Revolutionary War, Civil War, World War I, World War II, Korean War, Vietnam War, etc).

The first martyr of the American Revolution was a black man, Crispus Attucks. Yet, Trump, the NFL, and footballer Drew Brees call African Americans thugs and unpatriotic for kneeling during the anthem to bring attention to injustice. 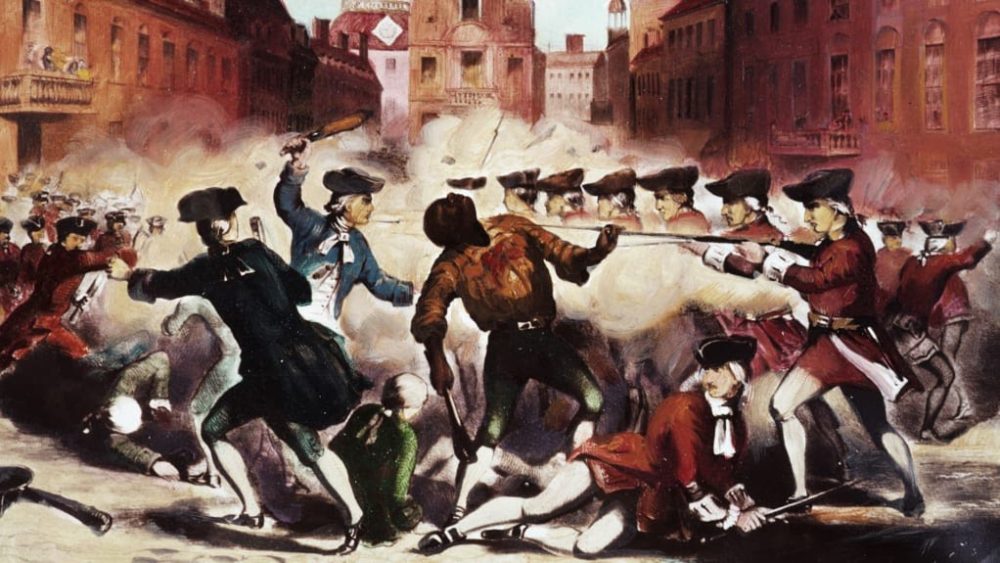 Patriotism is being treated inhumanely by your country while serving in World War I and returning to being lynched and beaten by white mobs and law enforcement. Patriotism is despite Jim Crow and separate but equal, still fighting for America in World War II as segregated troops.

Patriotism is returning from war believing that America would honor its promise that all men are created equal only to be water hosed and attacked by dogs for asking for those unalienable rights of life, liberty and the pursuit of happiness. Patriotism is watching America burn down your economic progress (Black Wall Street and Rosewood) and kill your leaders (Malcolm, Martin) as the FBI declares: “The purpose of this new counterintelligence endeavour is to expose, disrupt, misdirect, discredit or otherwise neutralise the activities of black-nationalist…their leadership, spokesmen, membership and supporters…to prevent the rise of a ‘Black Messiah’ who could ‘unify and electrify’ the black community.”

Patriotism is winning medals for this country and flag believing it will commit to justice for all by raising a fist like Olympians Tommie Smith and John Carlos or taking a knee like Colin Kaepernick only to be blacklisted and called a thug.

African Americans constitute over 17% of active duty military, yet a report showed that “black service members were substantially more likely than white service members to face military justice or disciplinary action, and these disparities failed to improve. The report identifies that the pattern of bias toward black personnel has gotten progressively grim over the years.”

The BBC reported that “roughly 45% of all homeless veterans are African American…African Americans have been fighting in conflicts for the US since the Revolutionary War. But despite their sacrifices, the reverence that America usually sets aside for its warriors has not been so forthcoming.” 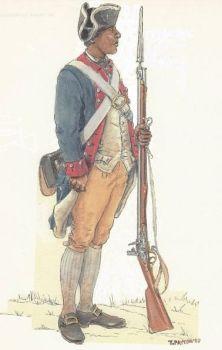 The hubris and arrogance of politicians who have not served and Americans who assume that only white people have served is beyond preposterous.

Blacks spilled blood and died under the same flag only to be denied equal protection and benefits. Yet, when we remind America of its hypocrisy, we are called unpatriotic and thugs.

As Trump tries to divide the country by invoking the flag (old glory), remember that the “land of the free and home of the brave” was won on the blood of black soldiers who are still brutalized by law enforcement. We have fought for America only to come home to unequal treatment, segregation, redlining, over-policing and police brutality.

We tried peaceful protests and sit-ins to appeal to America to honor our unalienable rights to life, liberty, and the pursuit of happiness. America has never maintained the contract that “all men are created equal” regarding black citizens.

Like the slave owners who enlisted their slaves to fight in their place in the Revolutionary War and took their bonus and military pay, so too the NCAA and NFL profit off of black athletes and then punishes them for bringing attention to racism and police brutality by taking a knee.

If this was ever about honoring the troops, then what about the black soldiers who gave their life fighting under the same flag? The NFL’s statement regarding George Floyd’s death is an insult when they fueled the racial divide over Colin Kaepernick kneeling. Hypocrites!

Before 2009, NFL players were not on the field for the anthem. Only after the Department of Defense offered the NFL millions of dollars to honor members of the military, did the NFL take an interest in the anthem –also known as paid patriotism. CBS noted: “A report released in 2015 by Arizona Republican Senators John McCain and Jeff Flake found that the Pentagon spent $6.8 million on sports marketing contracts with the National Football League, Major League Baseball, the National Hockey League and Major League Soccer on what the senators dubbed “paid patriotism.”

As the Equal Justice Institute noted: “No one was more at risk of experiencing targeted violence than black veterans who had proven their valor and courage as soldiers during the Civil War, World War I, and World War II. Military service sparked dreams of racial equality for generations of African Americans, but rather than welcomed home and honored for their service, many black veterans were targeted for mistreatment, violence, and murder during the lynching era due to their race and military experience. Black veterans died at the hands of mobs and persons acting under the color of official authority. No community is more deserving of recognition and acknowledgment than those black men and women veterans who bravely risked their lives to defend this country’s freedom, only to have their own freedom denied and threatened because of racial bigotry.”

Army records indicate: “These were [black] freemen…and slaves who were serving in place of their masters, fighting for freedom they would never see for themselves. In many cases, [slaves’] enlistment bonuses or even their pay went straight to their [slave] masters. It was a war for freedom, not only for their country, but for themselves. Far too many returned to the yoke of slavery, some for a few years until their masters remembered promising to free them if they served, but others, having fought for freedom, were doomed to remain slaves forever.”

The National Park Service noted: “Approximately 5 percent of the American soldiers at the Battle of Bunker Hill were black. The Revolution brought change for some American blacks, although nothing approaching full equality. Still, free blacks in both the North and South faced persistent discrimination in virtually every aspect of life, notably employment, housing, and education.” 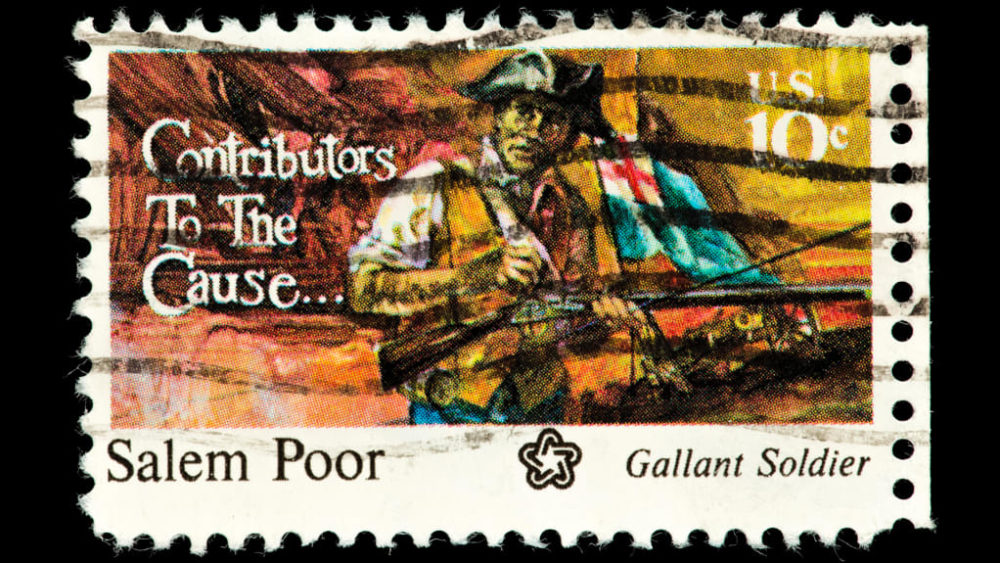 Salem Poor, born a slave, purchased his freedom and became a hero at the Battle of Bunker Hill. 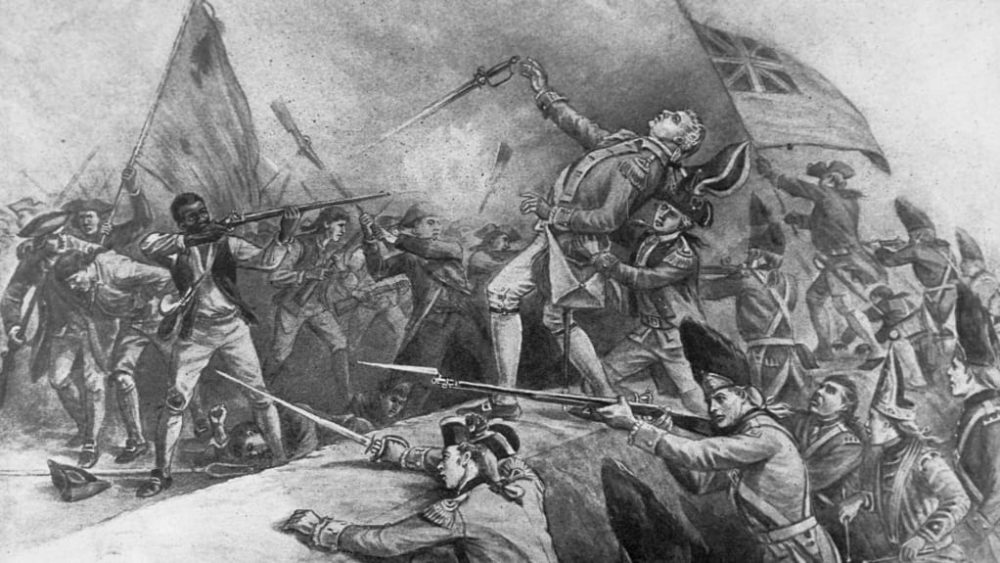 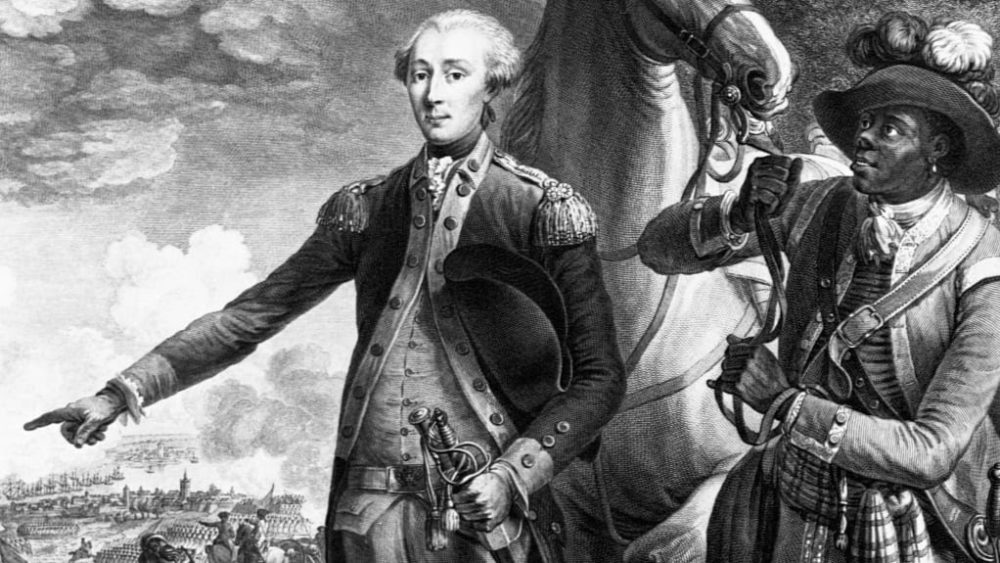 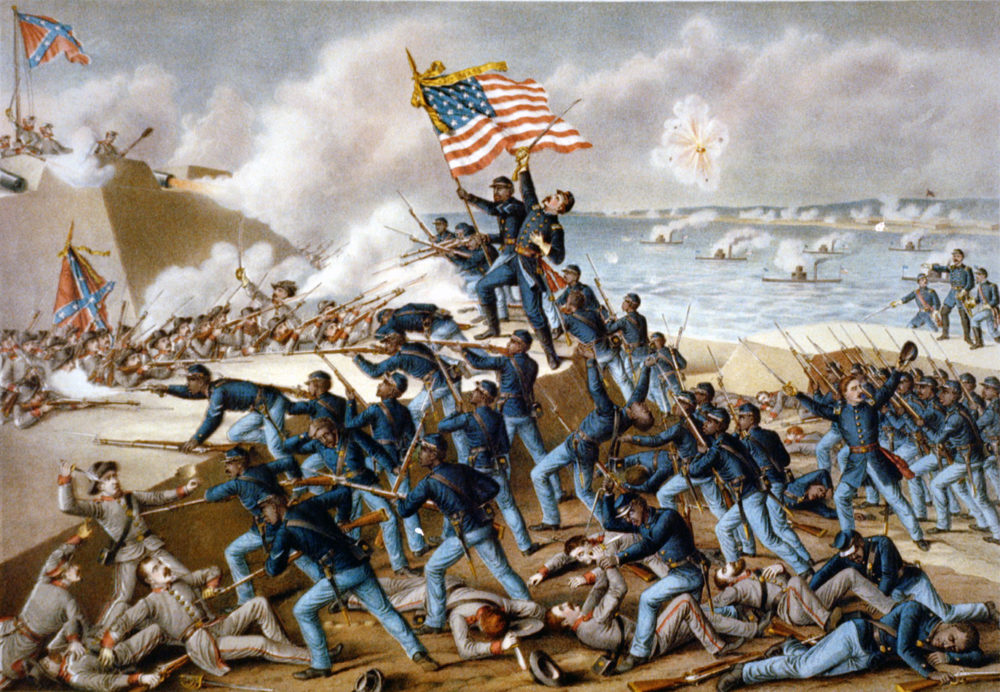 The movie Glory highlights the 54th Regiment and the incongruity facing the black slave fighting for a country to end slavery that still whips them. The movie Harriet show Harriet Tubman not only as a leader on the Underground Railroad, but also as a Union spy and “first woman in U.S. history to lead a military expedition.” Fighting for the American flag only to have every promise revoked. No forty-acres and a mule and instead of slavery, segregation. 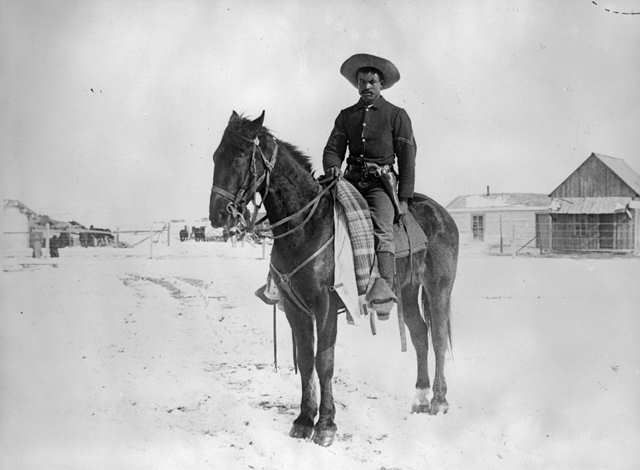 The Smithsonian notes “an 1866 Act of Congress created regiments of exclusively black soldiers—colloquially referred to as the Buffalo Soldiers. Throughout their history, the soldiers had a rocky relationship with the American government they served. The regiments faced extreme and sometimes deadly racism. The Buffalo Soldiers became known for their courage and fortitude.

Among the white U.S. officers commanding them were three black West Point graduates: Henry O. Flipper, John Hanks Alexander and Charles Young. The regiments served from 1866 until the army was desegregated in 1951.” Bob Marley honored them in song, “There was a Buffalo Soldier in the heart of America, stolen from Africa, brought to America. Fighting on arrival, fighting for survival.” 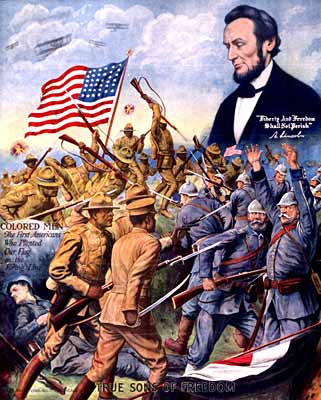 According the National Park Service: “During the First World War, many African Americans felt the Buffalo Soldiers would form the nucleus of an all-Black division. Racism within the army and the Woodrow Wilson administration blocked any hope of that happening.

The veteran Buffalo Soldier regiments of the Regular Army were also denied the opportunity to go into battle on the Western Front. Several African American National Guard regiments and battalions were called to active duty and sent to fight in the European war. Thousands of African Americans either enlisted or responded to the draft during the war.

Most African American troops in the Expeditionary Forces were segregated and consolidated into two Divisions, the 92nd and the 93rd. The men of the 92nd Division were used primarily as support troops. The 93rd Division was placed under the direct command and control of the French army. These men distinguished themselves in battle, but casualties were high with dead or wounded men totaling almost 50% of the division. The men of the 93rd were recognized with 68 Croix de Guerre’s and 24 Distinguished Service Crosses.” 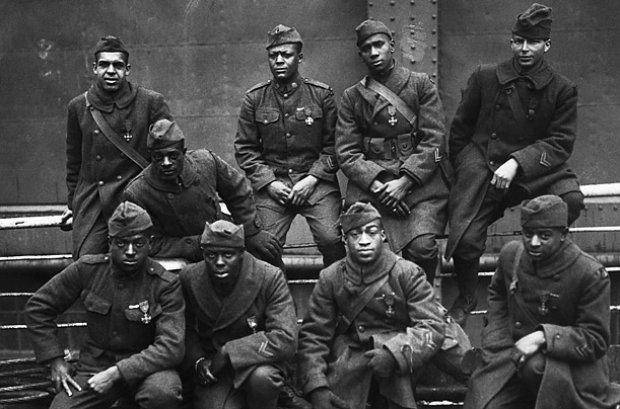 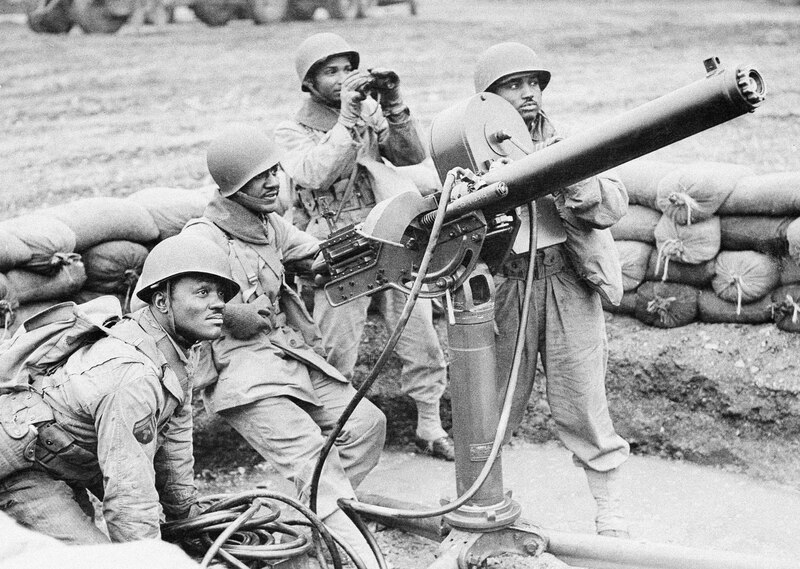 The Tuskegee Airmen aka Red Tails were the first black military pilots. Military Times noted black troops “were part of the victorious army that liberated Europe from Nazi rule. Black soldiers were also part of the U.S. Army of occupation in Germany after the war. Still serving in strictly segregated units, they were sent to democratize the Germans and expunge all forms of racism.

African-American cultural expressions such as jazz, defamed and banned by the Nazis, were another reason so many Germans were drawn to their black liberators.

White America was stunned to see how much black GIs enjoyed their time abroad, and how much they dreaded their return home to the U.S. It was that experience that convinced many of these veterans to continue their struggle for equality when they returned home to the U.S. They were to become the foot soldiers of the civil rights movement.

The veterans who had been abroad electrified and energized the larger struggle to make America live up to its promise of democracy and justice. They joined the NAACP in record numbers and founded new chapters of that organization in the South, despite a wave of violence against returning veterans.

Veterans of World War II and the Korean War became the foot soldiers of the civil rights movement in the 1950s and 1960s. Medgar Evers, Amzie Moore, Hosea Williams and Aaron Henry are some of the better-known names, but countless others helped advance the struggle. About one-third of the leaders in the civil rights movement were veterans of World War II.” 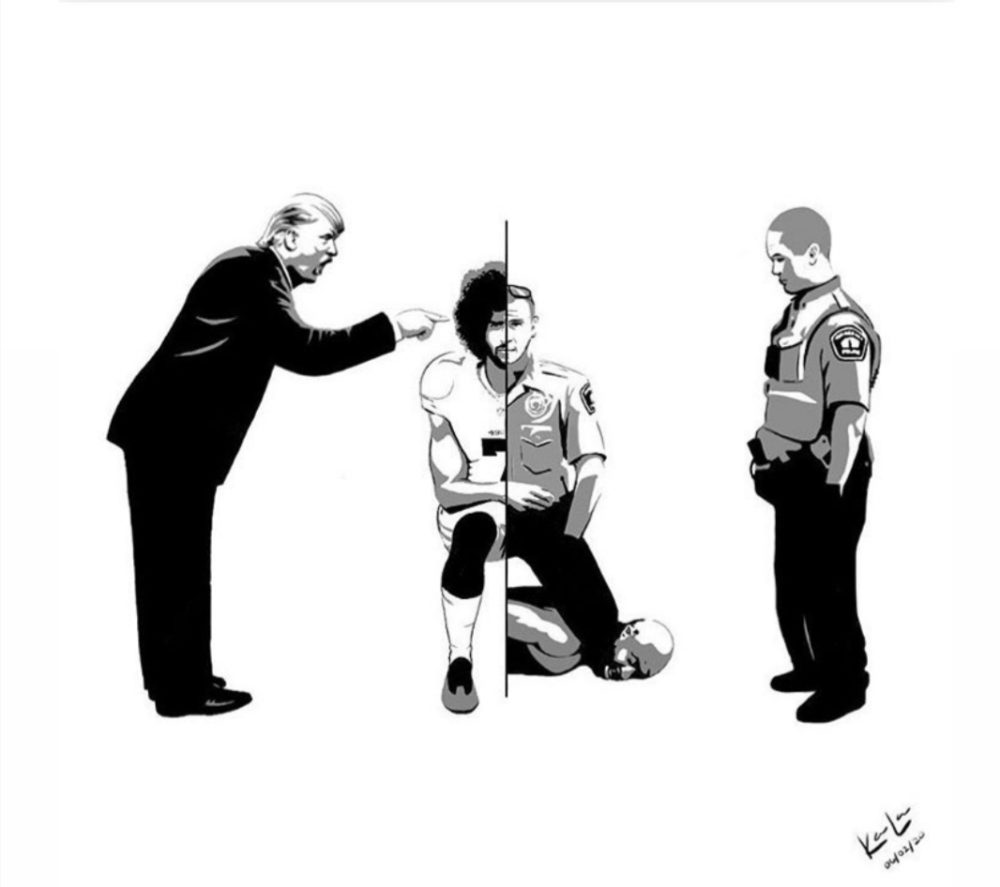 We kneel, raise our fist, and protest because police have looted and brutalized black bodies unchecked without consequence.

Politicians and police unions always mention it is only a few bad apples on the force. If that is true, why do the “good cops” rally in a show of support around the bad actors like Anthony Abbate and the Buffalo police department?

If there were only a few bad cops, then why across the country are police in every city brutally beating peaceful protesters? Why were police shooting rubber bullets at reporters on live television? Impunity — they know there are no consequences because the police code of silence will protect them.

When the NFL, Trump and others denigrate blacks who kneel and raise their fist during the anthem, they desecrate and dishonor blacks soldiers and veterans who fought and died for this flag, country and civil rights their descendants still have not realized. Most African Americans have family members who have served in America’s wars.

Spare me kneeling dishonors your grandfather’s service, Drew Brees. My grandfather, uncles, and nephews have served too while being discriminated against. As Americans celebrate the Fourth of July, remember the first martyr to die for your freedom was a black man whose descendants are still denied life and liberty while being murdered by the police due to racial profiling.