I wanted to be silent because anger and rage is high. I am fed up and tired of being sick and tired of America’s racism, prejudice, faux political correctness, liberal whites who only give lip service to the black community but want our votes and other people of color who remain silent at black oppression until they become a targeted group then all of a sudden want black support. I am sick of white people who are “colorblind.”

That is a convenient cop out because if you do not see color then you do not see my oppressors or the systems in place to keep racism alive. I do not want to hear All Lives Matter when you turn a blind eye to the brutality daily administered on the black community.

For years, the white community ignored the pleas of black America about police brutality and white supremacists in the ranks of law enforcement, acting as if it was a figment of our imaginations. Even with cellphone video of police brutality, there is still the age-old white fallback “but we don’t know what happened before they started recording.”

White people armed with rifles, guns, and automatic weapons stormed state capitols. No one was tear gassed or arrested even as they yelled at police and threatened medical workers. Yet, when we peacefully protest we are tear gassed. George Floyd was just the straw that broke the camel’s back. Amy Cooper weaponized her “white damsel in distress” privilege against a black man in Central Park the same as the woman who lied about Emmett Till.

I am tired of white feminists who talk about equality for women but silence black women’s voices – mansplaining why they cannot stand with us on issues of police brutality etc. Jane Elliott’s question to white America makes it clear, you know that America is unfair to black people and do not wish to be treated like black people, yet you allow the injustice to happen.

That is white privilege and entitlement in a nutshell. You understand if the police are called and there is a white person and a black person, the black person is presumed to be the aggressor. My apartment was robbed and Chicago Police had the audacity to ask me if it was my boyfriend because the robber was black. This bull happens on the regular to black people regardless of how many professional degrees or accolades we attain, when it comes to law enforcement and the justice system, we just another nigger that needs to be put in his place.

For those complaining about looters, white guys destroy property when their sports team wins a championship and it is “boys being boys,” but blacks protest police brutality and injustice by kneeling and marching and we are thugs. Businesses have insurance and will be covered for looting damage, lives lost due to police brutality are not coming back.

George Floyd, Ahmaud Arbery, Sean Reed, Breonna Taylor and others are only the small numbers caught on video. Many untold black lives have been killed due to police brutality because there was no camera to capture the death and beatings.

For years blacks have tried to play by America’s rules, vote, peaceful protests, file lawsuits, etc. But you’re more concerned about the looting? As Trevor Noah noted, law enforcement has been looting black bodies since the birth of this nation.

History reminder that law enforcement has used agitators to delegitimize those protesting racism, prejudice, injustice and inequality. It happened to Martin Luther King Jr. during the Memphis Sanitation March where police killed a black teen, Larry Payne, and harmed women and children at the AME church. It happened to Fred Hampton and the Black Panthers. It happened to Occupy Wall Street (OWS) protesters and it is happening to Black Lives Matter protesters.

In 1943, painter Norman Lewis created a piece titled Police Beating. Norman Lewis wrote of this piece: “I was constantly being investigated…when we picketed, being harassed by the police…[white picketers] being bothered by the police was entirely different from the black cat being beaten by the police. It almost seems that the police had more license to beat [black picketers] up…The hostility, they almost singled you out to beat you.”

Black Wall Street existed because slavery and Jim Crow taught us that we are all we have, but whites burned it down. The Black Panthers origin was rooted in the fact that blacks were not entitled to the same social service benefits as whites. Therefore, the Black Panthers took on the role of social service and after school program providers.

The Black Panthers, Martin Luther King Jr., and Malcolm X’s emphasis on brotherhood and unity within black neighborhoods was so strong that J. Edgar Hoover used the FBI “to prevent the rise of a ‘Black Messiah’ who could ‘unify and electrify’ the black community.” Colin Kaepernick lost his job in the NFL for taking a knee to highlight police brutality similar to the sacrifice of Tommie Smith and John Carlos before him.

The Guardian reported “J Edgar Hoover, the head of America’s domestic law enforcement agency, the Federal Bureau of Investigation, issued the following directive: “The purpose of this new counterintelligence endeavour is to expose, disrupt, misdirect, discredit or otherwise neutralise the activities of black-nationalist, hate-type organisations and groupings, their leadership, spokesmen, membership and supporters…By “hate-type organisations”, Hoover explained that he meant “such groups as the Student Nonviolent Coordinating Committee, [King’s] Southern Christian Leadership Conference … the Congress of Racial Equality and the Nation of Islam”, the group Malcolm X belonged to until shortly before his 1965 murder. In February 1968, there was a massive demonstration in support of the then-imprisoned leader of the Black Panthers, and Stokely Carmichael and H Rap Brown merged SNCC with the Panthers. Hoover issued another directive: “Prevent the rise of a ‘messiah’ who could unify and electrify the militant black nationalist movement. Malcolm X might have been such a ‘messiah’… . Martin Luther King, Stokely Carmichael, and [Nation of Islam leader] Elijah Muhammed [sic] all aspire to this position … . King could be a very real contender for this position should he abandon his supposed ‘obedience’ to ‘white, liberal doctrines’ (nonviolence)… Hoover directed his agents to “prevent militant black nationalist groups and leaders from gaining respectability, by discrediting them … to the white community.” The FBI created children’s colouring books showing blacks murdering whites, ostensibly made by the Black Panther party to indoctrinate black children at Panther schools, so that whites and “moderate” blacks would be repulsed by these radicals.”

For whites who are uncomfortable with the protesting and looting, good. You should be. America was built on racism. It is in America’s DNA and its institutions. Separate but equal never went away. You, your apathy, your “but what about” isms, your why can’t I say the “n” word, your but I have black friends or a black grandchild, your failure to recognize racist imagery and language in marketing materials, your filtering racism through a lens that is palatable to you, your need to be viewed as a white savior but putting conditions on your allyship, your but I wasn’t a slave owner, your constant attempts to justify why you are not responsible…is the reason why we are here today.

Instead of trying to justify your discomfort with how protests are going, pull up to a civil rights organization and fight voter gerrymandering, voter repression, police brutality and stop appropriating black culture and staying silent when the black community is being assailed. And for anyone thinking about mentioning “black on black crime,” I quote attorney activist Nekima Levy Pounds:

“For people that respond to the Black Lives Matter movement with black on black crime, that is a separate and distinct issue. BLM is about states holding law enforcement accountable for misuse of powers and authority. When it comes to police brutality and violence by police, it is highly unlikely they will be held accountable. That is the hypocrisy of how the law functions and operates. The high rates of homicide in poor black communities is a by-product of inequality, lack of opportunity, suicide,genocide and lack of economic justice. If a black person commits homicide against another black person, he will be held accountable under the law and have a trial. Even the “black on black crime” argument as a counter to BLM is flawed. Eighty percent of white people killed are by other white people, but it’s never brought up or made like there is a special “pathology” within the white community like they do for black people. Whites killing whites is an indictment against the individual not the community at large. That is not true for blacks. If a black person commits a crime, then there must be a certain pathology within the black community.” – Nekima Levy Pounds

Please understand that there were several peaceful protests throughout America and in Europe. Yet, the focus was on the looters. Many protesters took a knee, sang songs, a group of black men protected a white police officer who was separated from his group. There are always those that try to hijack an organization’s mission to discredit them. These people are fewer in number than those standing for justice. Do not think it is not deliberate that military tanks rolled through Minneapolis residential neighborhoods last night and shot rubber bullets at people sitting on their porches.

Like Ferguson and other protests, police agitated protesters, kicking them, pulling off protesters’ face masks before pepper spraying them. This is no different than the dogs and water hoses used in the 1960s against civil rights protesters.

Last year, the Portland police department colluded with white nationalist group Patriot Prayer to tip them off if any of them showed up on the police radar or to warn them if they were under investigation. Last February, the FBI based in Sacramento spied on civil rights activists for “conspiracy to violate the rights of neo-Nazis.” This goes deep. In 2006, the FBI released its own study that white nationalists had infiltrated law enforcement and the military at alarming rates.

Two years ago, the Military Times reported that one out of four servicemembers said white nationalism within the military was a greater threat to America than foreign terrorism. I have written several articles about this. This is not about a few looters trying to discredit Black Lives Matter protesters.

This is about a corrupt police force that regularly loots black lives without consequence. The mere fact that more attention is given to the looters should emphasis how deep seeded this is. Colin Kaepernick lost his job for merely taking a knee to bring attention to this issue. This is not about protesters; the looters are a mere distraction. This is about the status quo and keeping black folks in their place. 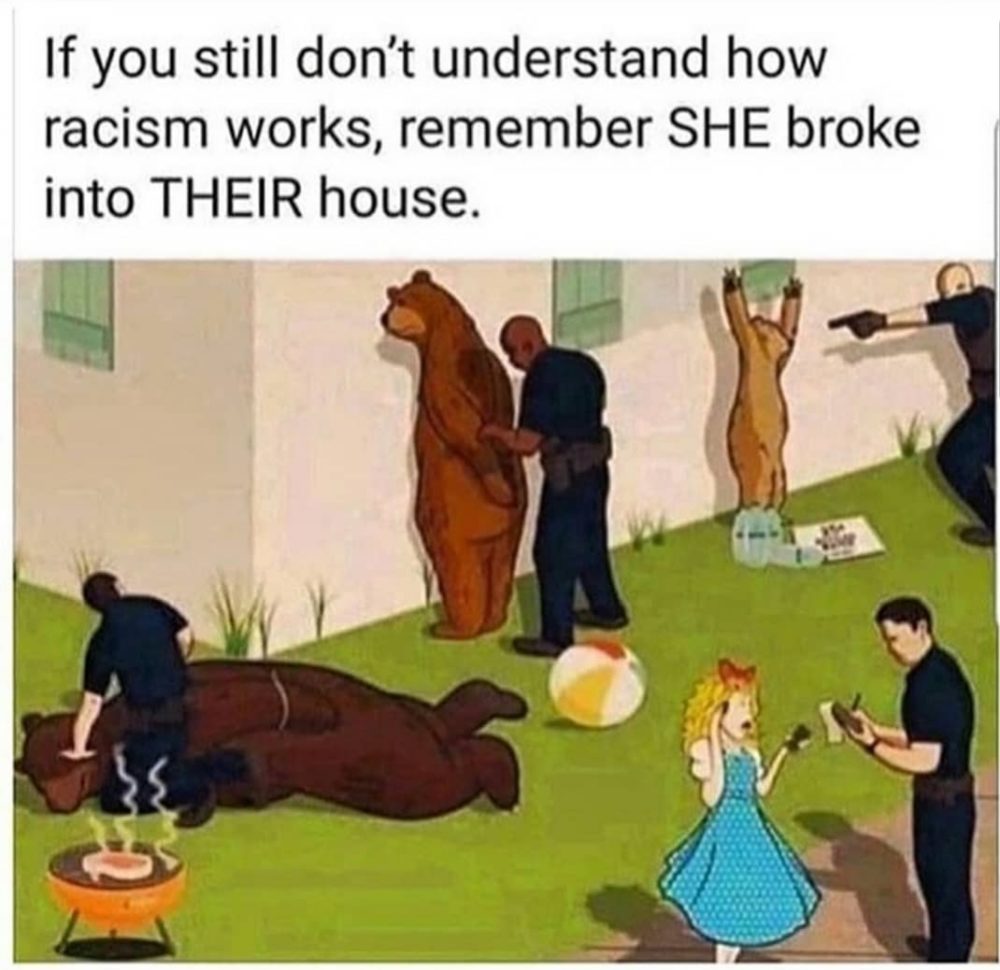 How white privilege and entitlement works. 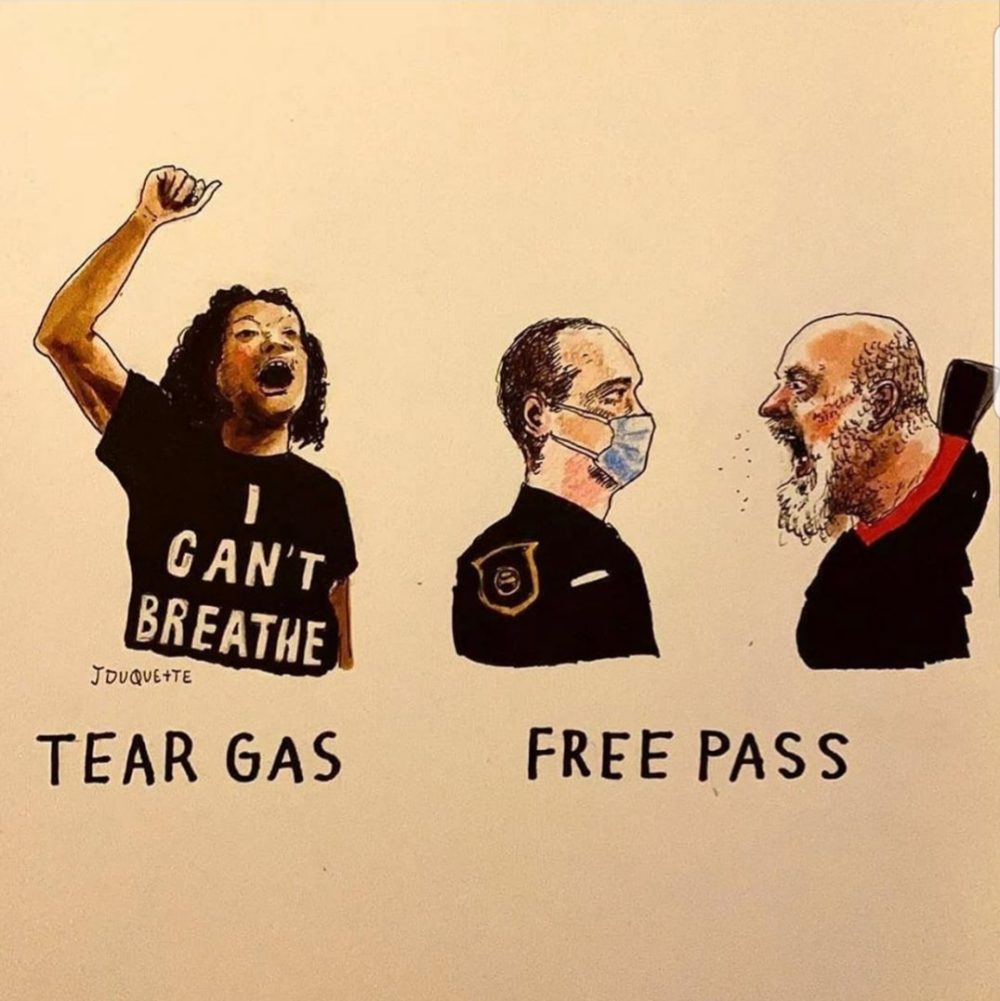 If you’re black protesting you’re a thug and tear gassed. If you’re white carrying a gun while yelling in the cop’s face, you’re exercising your freedom of speech. The hypocrisy of policing in America.